A Shard of Greek Sunshine

In my obituary for Harry Gill, I mentioned that our last conversation concerned a long-proposed tasting of wines from his beloved homeland, Greece. He was always holding court at the bar of his restaurant, serving and celebrating Greek wines in his own inimitable way. Some did not quite match his enthusiasm, but every now and then I discovered an absolute gem like the Assyrtiko from Hatzidakis Winery that could whisk you away to a sun-kissed Mediterranean island on the rainiest winter afternoon.

Though Harry is no longer with us, he had already organized delivery of these wines prior to his passing, and so I resolved to publish notes on these two dozen bottles. Naturally, it would be foolish to draw general conclusions from this small number, but Harry’s selections showcased the quality being produced and perhaps revealed where the wines are not quite so successful. Though we associate Greece with hot summers, in fact it is blessed with cooler mesoclimates due to altitude or exposure, especially on its multitudinous islands. 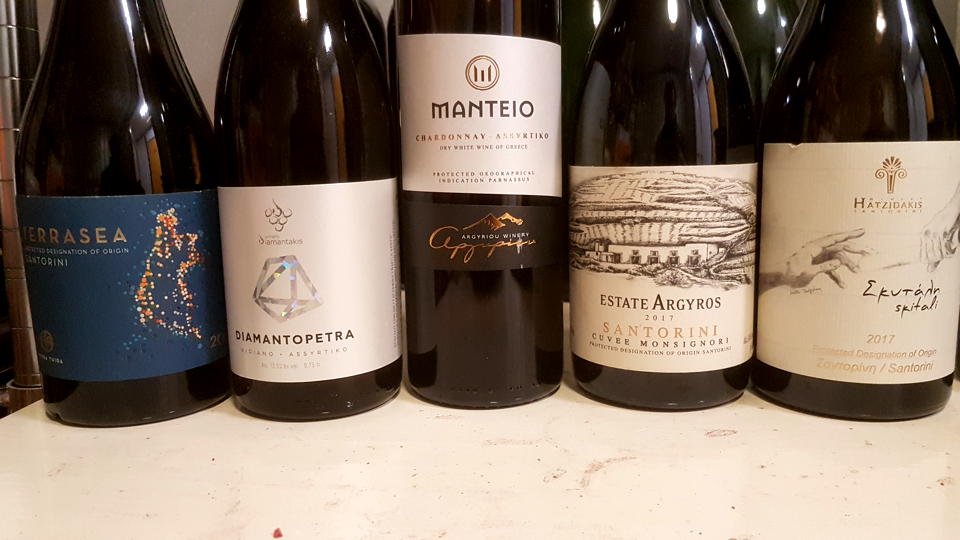 As much as I would like to praise a wine made from an indigenous variety, one of the finest reds turned out to be a Syrah, the 2018 Les Roi des Montagnes from the Papargyriou Winery. Syrah arguably travels better than any other red grape variety, and this wine takes the 100% new French oak in its stride, bursting with black fruit and the floral tropes associated with the grape. The palate is opulent yet beautifully controlled. Similarly, the 2017 Agios Chronos from Avantis offers further evidence that Syrah thrives in these climes. But come on – there has to be some representation from a Greek variety! That came courtesy of a lovely 2016 Agiorgitiko from Daemon in the sub-region of Nemea and the 2016 Diasporas Single Vineyard Xinomavro from Kir-Yianni in Naoussa. One of the best reds was definitely the 2018 Mavrotragano from Sigalas Wine on the island of Santorini. The wine offers a seductive tart red cherry nose tinged with menthol and a very convincing, mineral-driven palate that you would assume was from a much cooler microclimate. Some reds came across a bit top-heavy and rather generic, perhaps mimicking the Rhône or Bordeaux too much and losing some of their personality.

I have been an admirer of whites from the island of Santorini since the salad days of my career, and two or three examples here did not disappoint. The 2017 Skitali from Hatzidakis Winery, pure Assyrtiko aged on the fine lees, is blessed with a divine beeswax and honeysuckle nose and a saline finish that makes you think you’re sipping it on a white sand beach overlooking an azure sea, instead of an industrial estate just outside rainy Guildford. I appreciated the 2019 Aspros Lagos, a pure Vidiano from the Douloufakis Winery, especially for its pithy, waxy-textured palate, and the 2017 Museum Collection from Ktima Gerovassiliou, which came across like a low-botrytis Sauternes on the nose, then revealed a vibrant melon and grapefruit palate and an almost Alsace-like finish. It is one of those wines that needs time to open, but the more I became acquainted, the more I fell for its charms.

This selection of wines proved once again that Greece is capable of producing excellent wines, often retailing for far less than classic regions of the Old World. Perhaps what dissuades potential consumers is the pronunciation, which is admittedly not the easiest, though you could say the same for many tongue-twisting German wines and even French châteaux. Thank you, Harry, the Dionysus of Swiss Cottage, for all the Greek wine that you opened. I hope to taste more in the future.