Prosecco: Fun in the Glass but a Whole Lot More Too

Prosecco can be made in two Italian regions, Veneto and Friuli Venezia Giulia, an enormous swath of land subdivided amongst nine provinces and 556 communes. Admittedly, that’s a lot of land, and a lot of wines. Therefore, unlike with most other Italian denominazioni, it is extremely helpful for wine lovers to know what each stands for and delivers, for not all wines labeled Prosecco are of the same quality level. 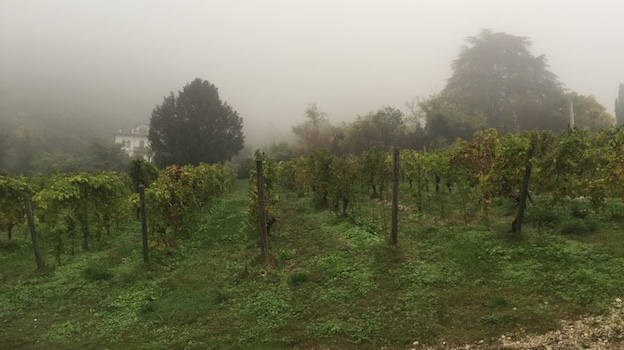 Not all Proseccos that will grace your glass are created equal. In fact, there are fewer wines in Italy that exhibit such a wide range in the precision and concentration of their aromas and flavors. In fact, differences can be so striking that anyone paying even a modicum of attention can appreciate them immediately. There are four denominations of Prosecco, representing a pyramid of quality. The base of the pyramid is made up by Prosecco DOC (or Denominazione di Origine Controllata), which encompasses 556 communes (and about 25,000 hectares of land), clearly the result of a charming, all-together now and the more-the-merrier attitude towards life, but one that is also very loosely grounded in terroir (or logic, for that matter). Clearly, an area so large presents widely differing soils, exposures, and microclimates. Using soils as an example, these run the gamut from the leaner terrains around the Piave River, the more fertile lands of the pianura padana, and the sandy soils near Venice. Commendably, the Prosecco DOC consortium is cognizant of the fact that the denomination, as is, is much too large, and are working towards zonation studies and the creation of subzones that will greatly help distinguish the Prosecco wines made within it, each with its own story to tell. Though there are some lovely Prosecco DOC wines to be had, there are far too many that contribute to Prosecco’s industrial, cheap tipple reputation. Next up the pyramid is Prosecco Treviso, a DOC wine that can be made in ninety-five (95) townships. These wines can range anywhere from the insipid and short to the solidly made and interesting, even outstanding; they almost always offer a step up in density and complexity of flavor with respect to generic entry level Prosecco. The top level of Prosecco wines are the two DOCGs (Denominazione di Origine Controllata e Garantita), named respectively Prosecco Asolo (or dei Colli Asolani) and Conegliano-Valdobbiadene Prosecco Superiore. The former extends over roughly one thousand hectares, while the latter is about 8,000 hectares large (sprawling over thirty-five communes).

While the Prosecco Asolo wines are still trying to establish an identity and organoleptic features specific to their wine production zone (even Italians have trouble telling you what an Asolo Prosecco should taste like and how or why it differs from others), those from Valdobbiadene are the pick of the litter. It is in the band of flatland and hillside vineyards extending from Conegliano to Valdobbiadene that Italy’s best Proseccos are made, thanks to geologically diverse soils and a unique microclimate created by the Dolomite mountains to the north (which protect the vineyards from cold northerly winds) and the Venice lagoon in the south, with its warm, northerly breezes. Generally speaking, Conegliano grapes, culled from clay-rich soils provide Prosecco with body, while grapes grown in the higher hillside vineyards of Valdobbiadene confer fragrance and freshness. It follows that historically producers often looked to blend grapes from these areas together. In fact, there is no doubt in my mind that the one true Grand Cru Prosecco area of Italy is Valdobbiadene; or more precisely, areas within the Valdobbiadene zone (Cartizze, like d’Yquem, is best thought of as a grand cru classé hors classe): the best examples of Prosecco from Valdobbiadene exude penetrating, perfumed and precise aromas and flavors that are simply not found in Proseccos from anywhere else. Forty-three single vineyard sites have been identified there and given official names (‘Rive’) and can be found on labels. Valdobbiadene vineyards can be extremely steep, which means a lot more work for producers: by comparison, while flatland vineyards require roughly 120 hours or less of work per hectare, Valdobbiadene’s Rive single vineyards can require as much as 700 or more (hours of work per hectare is a unit of measure indicating the number of hours worked on a hectare over the course of twelve months; clearly, the steeper the slope, the more hours are required, while flatland, machine-harvested vineyards that are obviously easier and faster to work require less work hours). 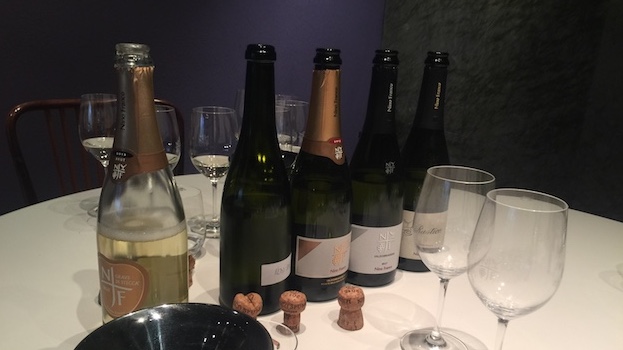 Lineup of Prosecco bottles during tasting

How Prosecco is Made

Prosecco is the name of the wine, while Glera is the main grape variety used to make Prosecco. Nowadays, most Proseccos are 100% Glera, but small percentages of other varieties can be found in some wines, such as the native grapes Perera, Bianchetta Trevigiana and Verdiso, along with Chardonnay and Pinot Bianco. The three native grapes are historically famous and long associated with winemaking in the area, each adding something to the final blend (Perera gives a very perfumed wine; Verdiso contributes acidity; Bianchetta is similar to Glera but adds structure and roundness). Chardonnay and Pinot Bianco can be problematic – add too much in a blend and they can overpower Glera’s delicate, one-of-a-kind charms. Of course, the native grapes aren’t free of problems either. For example, Perera is especially sensitive to the vine disease flavescenza dorata, so growers don’t want to use it anymore because it increases the need for anti-pest treatments.

Prosecco is a sparkling wine made by the autoclave method. The must is first obtained via gentle pressing of the grapes, then settled, and fermented with selected or natural yeasts at controlled temperatures in stainless steel vats. There, it matures for usually up to 90 days (and even more), after which it undergoes secondary fermentation in steel pressure fermenters or autoclaves. The method of autoclave fermentation was first devised by an Italian, Martinotti, and later patented by Charmat; therefore, the correct name of this technique is the Martinotti-Charmat method. Recently, say over the last ten years, the traditional method of making Prosecco by secondary fermentation in the bottle (much as in Champagne or Franciacorta, for example) has become popular again (see below). However, not everyone is convinced that secondary fermentation in the bottle allows Glera’s bright, fruity and aromatic charms to shine as brightly as they do with the autoclave method, though it is not entirely clear why this would be so. Certainly, Glera wines made by fermentation in the bottle are much more austere and earthy than those made by the Martinotti-Charmat method; worse, they really don’t provide what people expect of, and are looking for, in their Prosecco.

Understanding Prosecco Categories (and the Magic that is Cartizze)

Prosecco was originally a sweet wine with as much as 40-50 grams per liter of residual sugar, probably because wine in Italy was long viewed as a source of sugar and calories, rather than an alcoholic beverage. It is a commonly held view that Prosecco has become drier in style only over recent decades in accordance with the changing times that seem to want drier wines. So while there is an increasing number of Brut and even Extra Brut Prosecco wines on the market (some producers are tweaking down the sugar levels of their Extra Dry wines too), not all are as balanced and as delicious as the best Extra Dry Proseccos available. Clearly, many locals and experts alike (myself included) believe that it is the Extra Dry category that best allows Glera’s charms to shine. In fact, the Valdobbiadene DOCG doesn’t even recognize the Extra Brut category, so producers making such wines have to use other names such as Dosaggio Zero (Zero Dosage) or resort to identifying their wines as Vino Spumante di Qualità, for those wines cannot be called Prosecco. Another growing trend is Prosecco sul lievito (or sui lieviti, plural) or sul fondo, all of which translate to ‘on the lees’. Keeping Prosecco on the lees has long been an integral part of the local winemaking traditions, one that has only recently been brought back to life. During the spring following the harvest, the secondary refermentation occurs directly in the bottle in the manner of Champagne thanks to the presence of yeasts that besides adding specific, easy-to-recognize aroma and flavor components (delicate nuances of butter, toast, brioche and mushrooms) also act as natural preservatives and anti-oxidants.

Last but not least, the most famous Prosecco of all is Cartizze, made from 106 hectares in the heart of the Prosecco zone. It is from this hallowed piece of land that truly hors classe quality Prosecco can be made. Believe it or not, Cartizze’s reputation is such that it is Italy’s most expensive piece of vineyard land, costing an estimated 800-950,000 euros per hectare (but that’s only a theoretical value, since nobody who owns land in Cartizze sells any; by comparison, Valdobbiadene is roughly 650,000 euros/hectare). Cartizze is where the most elegant, precise and intensely perfumed Prosecco wines of all are made. 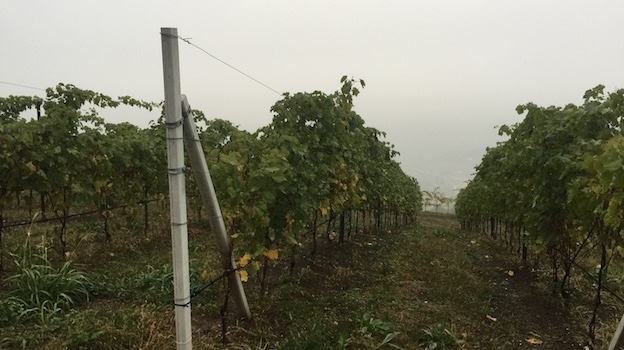 Lessini Durello is made in nineteen communes in Vicenza and six in Verona near the Lessini mountains, on mainly volcanic soils. However, land ideally suited to vineyards is scarce because of hills that are often too steep, the presence of protected large forests, cold microclimates and a lack of sufficient sunlight hours.

Lessini Durellos are sparkling wines made with the native and local Durella grape variety (a few wines have small percentages of other grapes added such as Chardonnay, Garganega or even Pinot Noir blended in). Non-sparkling wines made with Durella are labeled Veneto or Monti Lessini Durella (the still dry wines) or Monti Lessini Passito or Monti Lessini Durella Passito (the sweet wines). Durella is a rustic variety characterized by very stable, even copious production volumes and extremely high total acidities, thereby endearing it to farmers as well as making it an ideal grape for sparkling wine production. Even more importantly, it is a variety much better equipped to stand up to climate change than Glera or Garganega, for it doesn’t drop its acidity level like those other two do. Plantings and production of Durella have been up and down over the years, mainly as a result of wine fads and what was hot (or not) at any given time; but farmers have never turned their back on what is a quality, highly dependable variety. The wines are characterized by much bigger structure and total acidity than Prosecco, and by easily recognizable honey, orchard fruit, and resiny aromas and flavors complemented by a strong lemony and intense mineral presence. Sneaky concentration and richness, plus noteworthy aging capacity, are typical of the wines, as are the generally very low alcohol levels (11.5-12% is the standard). Broadly speaking, Lessini Durellos are less creamy than Franciacortas, but have much better acidity and lift.

Lessini Durello wines can be made both via the Martinotti-Charmat method (like most Proseccos), though most are made by secondary fermentation in the bottle in the manner of Champagne. Unfortunately it isn’t always easy to tell from the label how a specific wine was made, although the term ‘riserva’ always means a wine made by secondary fermentation. The DOC is young (1986); the Consorzio of the Lessini Durello was born only ten years later and has strongly promoted the variety’s merits and encouraged planting it.

The 2015 is generally viewed as a great one, one of the best in memory, with perfumed, balanced and powerful wines. By contrast, 2014 was exceptionally difficult, with lots of rain and humidity. Higher hillside locations like the Rive, where air currents helped reduce the risks posed by stagnant humidity, usually provided the best, healthiest grapes.

The Wines of Campania: Getting Better and Better, Ian D’Agata, November 2016