Eugene Lee: It’s His Home for the Holidays

“When I was young, my mom – as much as she hated touching a raw turkey – made Thanksgiving dinner for us because I wanted to have an American Thanksgiving. That was really important to me as a little boy. We came to this country when I was four years old and it was important for me to feel American. So, my mom would go out of her way and make us a Thanksgiving dinner. She really tried, but it was stuffing out of a box, yams out of can – just your basic Thanksgiving meal, but it was the tradition that we had every year.”

I’ve come to Los Angeles, a few days before Thanksgiving, to speak with Eugene Lee, a wine collector and technology executive in the entertainment industry. Initially, I reached out to Lee because I’d heard that he’s an interesting guy and pretty passionate about his wine collection. But, early on in our day, I get sidetracked talking to Lee about his colorful Thanksgiving tradition.

“After my wife and I got married, she started helping out with my mom’s dinners. Then, one by one, she started to make each dish from scratch. Every dish that we had she made her own. From the box to fresh-prepared. It used to be just my family and my wife. Then when I was at Creative Artists Agency, I had this friend who didn’t have any place to go for Thanksgiving, so he started joining us. That was in 2001 and to this day he comes every year. Then he got married and started to bring his wife. Now they have two kids and they all come. And his parents fly in from Halifax now, as well, to join our family.”

“My brother and sister and my sister’s family attend. My sister comes not only with her immediate family; she also brings her in-laws. My sister’s husband’s brother flies in from New York to join us. In all, they’ll be around 35 people there! Everyone brings something. If you bring a dish one year, then it’s tradition that you have to keep bringing that dish every year. My friend smokes a turkey. I smoke a prime rib. It’s very traditional.” 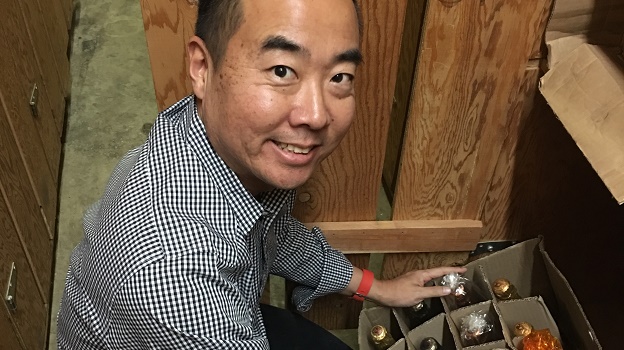 If it’s traditional, is there a Kid’s Table, I ask him?

“You kind of sit wherever you can find a seat in the house. We do a lunch. It starts at 1:30. Then we hang out. Then it’s leftovers at 6:00 PM. We look forward to it a lot. It’s our big event of the year. Bigger than Christmas.”

Lee and I are meeting inside his bright, cheerful office at Paramount Studios in Los Angeles, where Lee is the Vice-President of Information Technology for Viacom. Movie posters, a model Westfalia camper van made of Legos, a stand-up desk – all signal a creative, playful mind at work. His cheerful affect and brightly colored tennis shoes add a casual air and ease to our conversation.

I know that for myself, friends and family often expect me to bring the wine to Thanksgiving dinner. I ask Lee if this is the case at his house. “I don’t consider myself a wine expert by any means, but friends and family who aren’t into wine think I’m some kind of wine expert. There’s this expectation that if I’m opening up wines, they’ll be good. I will pull out a few Bordeaux. Probably some 1996 and 2000s. I will open a 1996 Pichon Lalande. Maybe a 1996 Cos d’ Estournel. Some Kosta Browne and Aubert Pinot Noirs. I may buy some Chablis, too. I have a friend who wanted to bring the Champagne but didn’t know what to buy, so I taught him this little trick. Just look for RM on a bottle of Champagne. I taught him where on the label to look. If you do that, 90% of the time that Champagne will be good.” [Here Lee is referencing Récoltant-Manipulant, a term used to identify Grower Champagnes, which are estate grown and produced.]

When it comes to wine collecting, Eugene Lee thinks he’s a late bloomer. He didn’t begin collecting wine until nine years ago, at the age of 32. “I was never much of a wine guy. There was not a lot of alcohol in our house growing up. I remember my parents having a bottle of Lancers in the house, but that’s it.”

But in 2006, while working at the Creative Artists Agency in Beverly Hills, he discovered a love for wine at the Cuvée Wine Bar. “That was our watering hole for work,” Lee says. “One day they hosted a Champagne tasting I attended. They were pouring Roederer. At the end of the night, when it cleared out, the host poured a 1990 Roederer Blanc des Blancs. I had never had an aged Champagne and it blew my mind…totally blew my mind. I thought it was fantastic. I quickly learned that aged Champagne is very hard to find. If you have enough money, you can probably buy any vintage of Bordeaux, but finding older Champagne is much harder. It was very hard to find 1990 Champagnes, so when I did find them, I bought as many as I could, and that’s how I started collecting.” 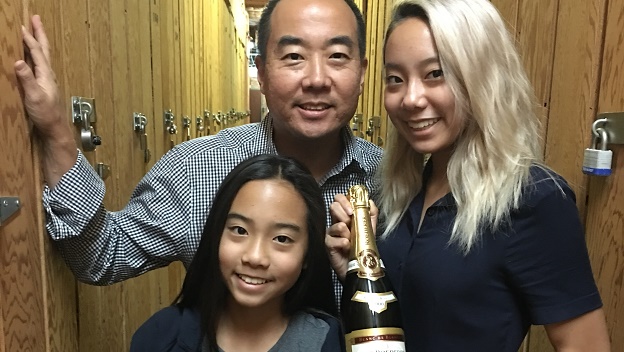 Eugene Lee with his daughters and their future wedding wines

Fairly early on, I’ve pegged Lee as a decidedly sentimental collector, eschewing the “acquisition and flipping” model for something more nostalgic. “I’m sentimental about vintages,” he says. In particular, 2000 and 2003 – his daughter’s birth years. Lee naturally gravitates towards Champagnes that can age for 20 to 30 years, so he is collecting now for his daughters. “I won’t be touching any of my Champagnes from 2000 and 2003…those are for when my daughters get married. That’s what we’ll pour at their weddings.”

Lee also purchased a few cases of 1998 Champagne Deutz William, the year he got married. Now, every year, he and his wife have that same bottle of Champagne on their anniversary. “So far, the marriage and Champagne are both increasing in quality,” he says with a grin. Lee stores his wines off-site at The Wine Locker in Van Nuys – mostly, he admits, “because it’s easier to hold onto wines when they’re not in the house.” 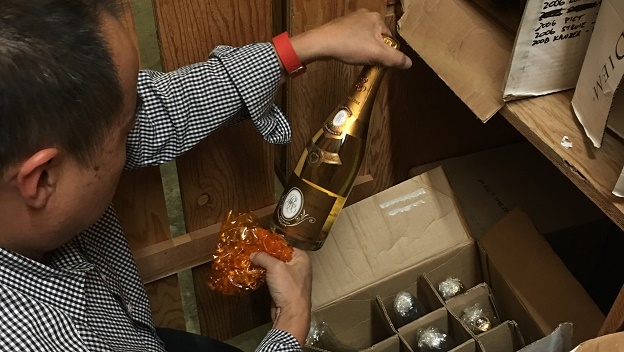 Eugene Lee retrieving a bottle of Cristal from his locker

In recent years, Lee has streamlined his collection. “I went crazy for a while. How many ‘vintages of the decade’ for Bordeaux did we have in the 2000s? Maybe six? So I kind of got sucked into that. I bought a lot of 2000, 2003, 2005 Bordeaux. I also started collecting Italian wines, California Pinots… My collection was all over the place. The positive spin would be to say I was ‘well diversified’, but in reality it was just all over the map.”

It was around this time that Lee noticed a lot of bottles in his cellar were priced between $50.00 and $100.00. He refers to these as middle-of-the-road wines in terms of pricing. “Those weren’t great investments, not that I ever thought of making money off my collection. By not being good investments, I mean that they weren’t nice enough for really special, memorable dinners, and they were too nice for every day drinking. I would open up these wines in that 50.00 to 75.00 range for dinner guests. The next morning, I’d find that I opened 8 bottles of wine for a dinner party – a lot of costly wine. That’s too much money to spend on a regular night with friends who aren’t really into wine and don’t really appreciate it. The ones I collect now are special bottles I intend to keep for a long time. I’m definitely a Bordeaux and Champagne guy. I’m purposely staying away from Burgundy. I haven’t attained the level of proficiency I want to have with Bordeaux, so to think about peeking into the world of Burgundy? It’s the upper echelon of wine…a lot of people would say the pinnacle of wine…but it seems like you have to go ‘all in’ with Burgundy. I love hearing people speak about the wines of Burgundy, but I can’t go all in. I’m still working on trying to understand Bordeaux!” 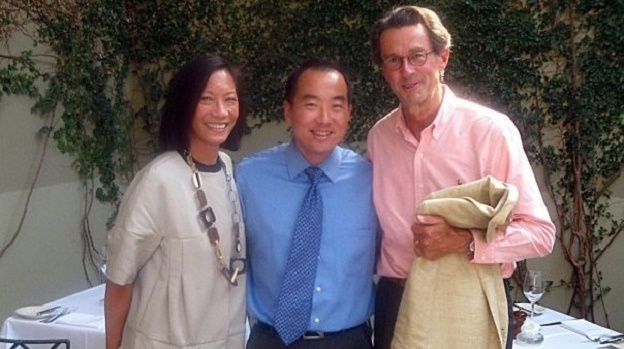 Eugene Lee with Christian and Cherise Moueix of Chateau Pétrus

Lee credits a friend who works for Maisons Marques & Domaines USA, the importer for Cristal, with having introduced him to some of the personalities behind the wines he has coveted. “I got invited to this lunch with Christian Moueix of Chateau Pétrus. It was for people in the wine business, but there was one empty seat. I was able to join in that day. That was really cool being able to meet him. He is such an esteemed figure in the wine world. I have an even greater affinity for those wines now, having met the man and having heard about his personal passion for his wines. And, being Korean, it was exciting for me to go to Benu Restaurant in San Francisco. Corey Lee, who was the Sous Chef at the French Laundry, is at the helm there, and he’s Korean. To be at a 3-star Michelin restaurant and know that the chef is Korean…well, that was very exciting. Then when I got there I realized that their Master Sommelier, Yoon Ha, was Korean, as well. That was very cool. What an honor to meet them.” 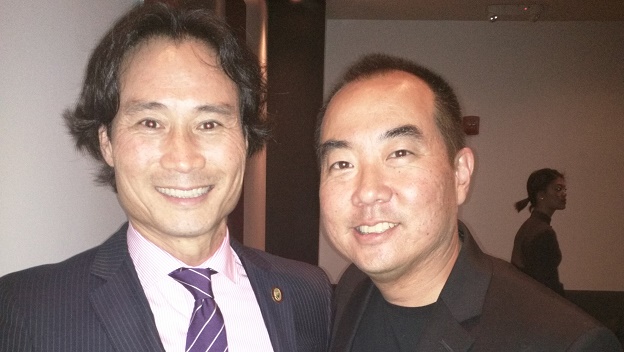 The morning is warming up; it’s a lovely day out, so Lee and I decide to continue our talk outside. We walk the gritty streets of New York, except that it’s really a backlot at Paramount Studios. I ask Lee about what it’s like living in Los Angeles, and, perhaps predictably, the weather is the first virtue he identifies. “We came from Korea to Southern California. This is all I know. I spend about a week in New York every month. New York is amazing, but I couldn’t imagine living there. I love visiting, but I was there last year during the snow storm. I could handle that for four or five days, knowing that I was leaving soon.  And the restaurants in Los Angeles; I love Totoraku. Everyone just always seems so happy to be there and it’s just so good. And also Bestia; that place blew my mind. And Mario Batali’s chi SPACCA is great. I think it’s my favorite. That’s Batali’s meat palace, if you will. They cure their own meats. They have a pork tenderloin and a Florentine bistecca that is unreal. For casual meals, I like Mistral. On any given night, it’s mostly locals.” 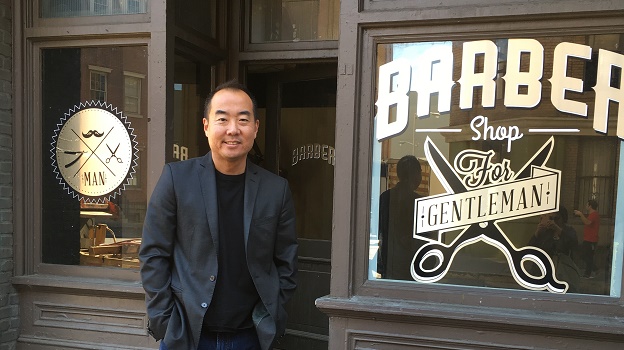 We start to exit New York…the particular street we’re on looks like something out of Brooklyn, and we stop in front of a charming fake barber shop where I snap some photos of Eugene. Earlier I joked about inviting myself over for his rather unwieldy Thanksgiving. It sounds pretty joyful, but soon I back-pedal and get jokey, as I feel he might think me rude. Instead Lee smiles broadly and says, “Yeah, join us. Really. It keeps getting bigger every year!”