“Aw right, ’arry. How the hell are you calling me down here?”

“I’m under the English Channel.”

“What d’ya mean you’re under the Channel?”
“I’m driving to Burgundy to taste the ‘19s. Eurotunnel must have a 4G connection.”

That was my last conversation with Harry Gill, who died from COVID-19 on February 8, 2021.

One of them was my friend.

Harry was a constant figure on London’s tasting circuit and Bordeaux en primeur week. A visit to his restaurant in Swiss Cottage was a rite of passage for anyone connected with the wine industry or interested in wine. His passing deserves a tribute because I am not the only person to declare that a valuable chunk of my vinous education took place at The Arches.

A couple of decades ago I began noticing an incongruous-looking couple at fine wine tastings. The gentleman had a mass of tight curly hair, sun-kissed Mediterranean skin and a magnificent aquiline nose that plunged in and out of wine glasses, his East End accent cutting through the hubbub of Received Pronunciation. A lady from Eastern Europe was often by his side, keeping him in order. Intrigued, I asked a colleague who they were.

“That’s Harry and Ivana,” he replied. “One day I’ll take you to their restaurant. Just don’t tell too many people about it.”

Around 2001 or 2002 (the exact date is lost to time and alcohol), I made my maiden trip to The Arches. On first appearance, it was no Michelin-starred establishment. It was your typical local bistro, just next door to a dry cleaner, an outside awning sheltering a few tables where patrons were sipping beer.

This was supposed to be a mecca for wine lovers. Had I got the right address? 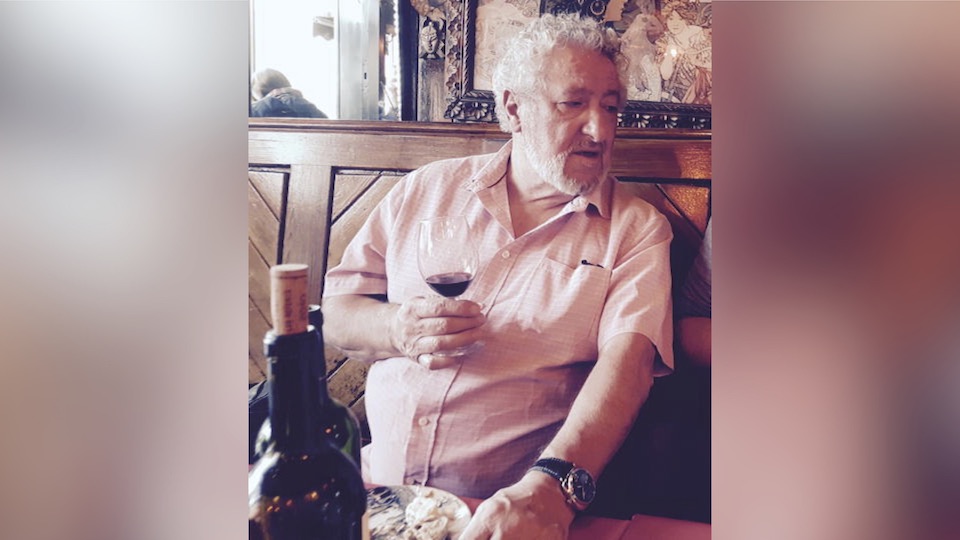 Harry Gill, pontificating about wine with a glass in his hand. This was our last lunch together, in February 2020.

I pushed open the glass door. The interior was dark and cozy, with the ambiance of a pub-bar, and aesthetically not far removed from a bric-a-brac shop in a black and white Ealing comedy, a tad messy and unkempt. Shelves heaved with a cornucopia of figurines and carafes, tin jugs and china dolls, miniature yachts and burnished silverware, a flotilla of Tiffany style lampshades dotted around tables, half-melted candles, the occasional forgotten Christmas decoration never taken down. Wine paraphernalia was everywhere. Newspaper cuttings were stuck to walls and rows of empty wine bottles: Mouton, Petrus and La Tâche, mementos from numerous dinners. Harry had built the tables himself by gluing varnished wooden case ends together. There was no sommelier; there was no point with Harry around. The staff consisted of vivacious Eastern European women under the direction of the matriarch, Ivana. I surveyed the clientele. Regulars propped up the bar with their pint of beer while pinstriped bankers splashed their bonuses on a bottle of Richebourg. Everyone was welcome, whatever he or she was drinking. I loved it.

The Arches was a church devoted to wine, and Harry Gill was the bishop. In fact, I gave him the moniker “the Good Bishop Gill” in subsequent write-ups on my nascent website. I cannot remember whether he joined us on that first visit, because I got blindly drunk, stumbled into a taxi, forgot my wallet, staggered to the front door of my new girlfriend’s bestie who had prepared dinner, and promptly fell unconscious onto her sofa. It set a precedent because if you drank at The Arches and did not leave at least partially hammered, then you had not been to The Arches.

A major part of the reason is that Harry could not resist pouring just one more bottle.

“C’mon mate, finish that up and ’ave some of this,” he urged as another ancient Bordeaux was martyred.

The wine list was legendary, hence the code of secrecy; bottles from Harry’s personal cache accumulated from UK merchants were supplemented with older bottles acquired at auction. Those were halcyon days when affordable fine wine was no oxymoron, so the rotating roster of gems back to the 1920s were sold at buying price plus a few quid. Wading through countless Clarets and Burgundies, not just classics, but also esoteric and forgotten vintages never found elsewhere, formed a vital part of my education. Unsurprisingly, The Arches became a magnet for members of the wine trade, wine writers and wine students, and tourists who had caught wind of its reputation. This mish-mash of oenophiles exchanged bottles across tables, and Harry would always be somewhere in the mix.

Wine lunches became the stuff of legend. Harry would rustle up a mouth-watering menu to match the various bottles proffered and served blind by attendees. It was a valuable and frequently humbling learning experience. Often, the best taster was not the merchant who had been in the business since pre-phylloxera times, or the MW that walked their exam, but Ivana, who had a knack for pausing running the restaurant, nonchalantly nailing the wine and then carrying on with her work. Then there was a time when “Big Steve” (everyone had a nickname) was stationed at the bar every Friday night, chomping an enormous cigar with an open bottle of 1990 Cheval Blanc; Harry had found a stash at a great price. All you had to say was “hello” and a glass would float your way. On occasion The Arches resembled a nightclub. I remember finishing off a bottle of 1978 Pavie as the music was turned up loud and people started dancing on tables. That never happened at La Gavroche. 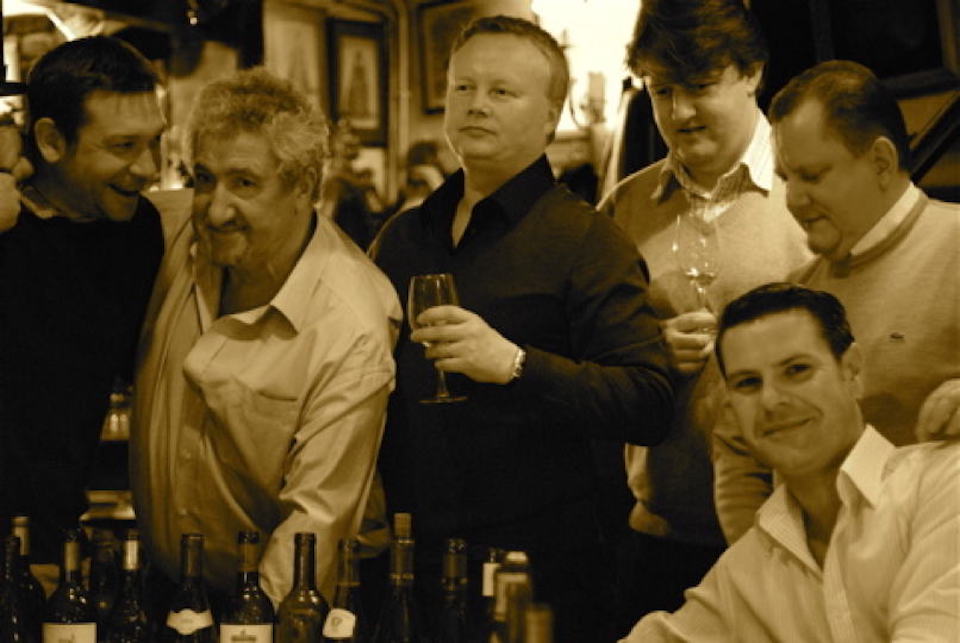 Another long liquid lunch at The Arches in February 2010, Harry Gill second left. The banter was always part and parcel of those sessions.

Harry was master of ceremonies. He ensured that his walls resounded with bacchanalian joy. There was no pretentiousness, no po-faced analysis or one-upmanship. The unwritten rule was to enjoy and appreciate a great wine without airs and graces. If you missed your last train home, then that was a small price to pay. Wines were never given a free pass by dint of reputation or cost, and Harry had no qualms about berating some “poncy” Bordeaux or Burgundy. Fueling this was his penchant for serving wines blind, especially to up-and-coming wine critics like yours truly. He reveled in dragging out my hapless analysis for as long as possible.

“You think it’s what?” he mocked at hearing yet another guess so wide of the mark it could ruin my fledgling career. “You’re ’aving a laugh, aren’t you.”

His playful derision was not reserved for supposed mavens like myself. Quite a number of winemakers ended up at The Arches, one traducing his own wine in front of his peers when Harry mischievously served it blind. 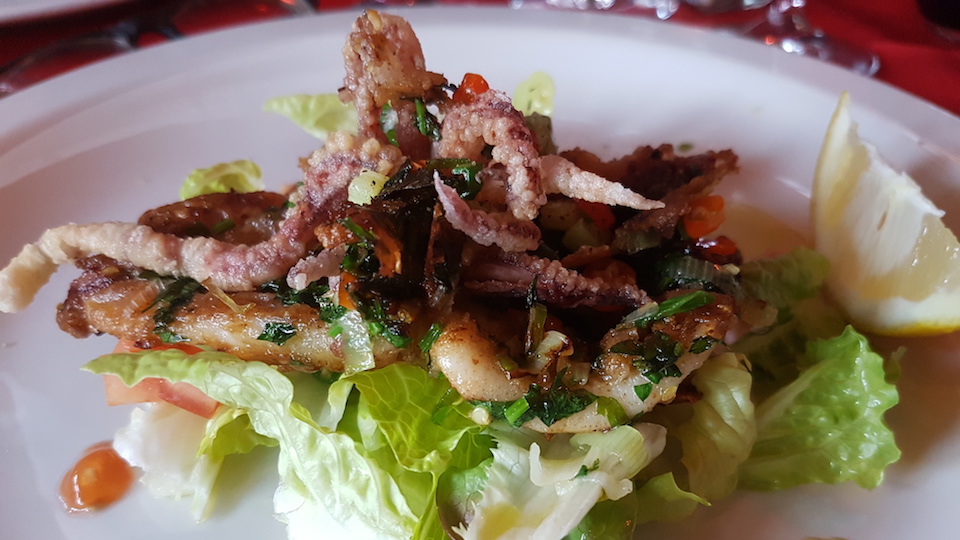 The last lunch I shared with Harry in February 2020. Harry loved the sea. Not surprisingly, The Arches excels at seafood.

Though The Arches has never aspired to haute cuisine, Harry made sure there was a competent chef in the kitchen. My stomach always left happy and full. I cracked open many a Burgundy Grand Cru with bangers and mash and a boatload of gravy - sacrilege to some, but hey, you’ve never tasted bangers and mash as good as this. Most memorable was an occasion when a friend and I went for lunch, Harry having returned from the Greek island of Poros that morning. He had caught some octopus (no doubt after grappling with it with his bare hands underwater), wrapped it in tin foil and smuggled it back in his suitcase. He cooked it on a disposable charcoal grill out in the back yard. One bite and I was whisked to the Mediterranean. This remains one of the most mouthwatering seafood experiences of my life. Thinking about it, Harry was ahead of the game in terms of serving simple but consistently delicious dishes. Restaurants like Noble Rot and Brat are now following the same principle and, in some ways, a similar aesthetic.

The Arches is where I booked the entire basement to celebrate my 33rd birthday; Harry made sure everyone was well lubricated. It is where I took Robert Parker’s business partner, who mentioned it for years afterward, asking me to give Harry his best regards. It is where I celebrated leaving my job as a wine buyer and starting my writing career. It’s where I dined with my wife on our first dates. It’s where I drank that wonderful 2018 Santorini Familia from Haridimos Hatzidakis last February, just a couple of weeks before lockdown, little knowing that it would be the last time I would have the pleasure of Harry’s company. That particular bottle was the catalyst for plans to organize a small tasting of Greek wines. Together with his friend Katerina, Harry had gathered the bottles at The Arches, ready for inspection. That is why he telephoned me when I was halfway through Eurotunnel. Now he will not be around to take part in that tasting, but it will proceed in his honor, not least because he was, quite rightly, passionate about the wines of his homeland.

Harry Gill created a beloved institution, a hidden treasure that is impossible to recreate. His restaurant reflected his larger-than-life character. He was a down-to-earth bon viveur who loved wine and loved sharing bottles. As the saying goes: They don’t make ’em like that anymore. One should celebrate a life and try not to mourn a death, and one thing you can say about Harry is that right to the very end, he lived life to the full. I will miss entering The Arches, seeing him at a stool by the bar in double denim, waxing lyrical or moaning about some bottle of this or that wine. But his spirit will always remain.