Wine and politics go together like Pinot Noir and Cabernet Sauvignon, which unless you are actor John Malkovich, is a combo most rational winemakers avoid. I keep my own views private but take an increasingly masochistic interest and love the odd slice of political scandal. Since 1956 the Gay Hussar in the Central London district of Soho was a scruffy but charismatic Hungarian restaurant that hosted cabals plotting downfalls, gerrymandering and skullduggery hatched over bowls of goulash and beetroot soup. It was the eating hole for ruddy-cheeked Observer and Guardian hacks and a magnet for political heavyweights who traipsed up to Greek Street straight from the dispatch box. It is where Tony Blair decided to run for parliament in 1982 and where Tory wets plotted Thatcher’s downfall in the early Eighties. (It failed, in case you were not aware). When its impending closure was announced in 2013 and again in 2018, the outcry was such that parliamentarians, in a unique moment of solidarity and pro-activeness, banded together to form the Goulash Co-operative to stave off closure, a result of dwindling lunchtime bacchanals and escalating rents. It was to no avail.

As it transpired, the Goulash Co-operative had little to worry about because this eccentric establishment had another chapter to tell. Understandably, regulars feared that the Gay Hussar would be succumb to Soho’s inexorable tide of gentrification that has erased its grimy but colorful underbelly that gives it its beating heart and scintilla of chaos. 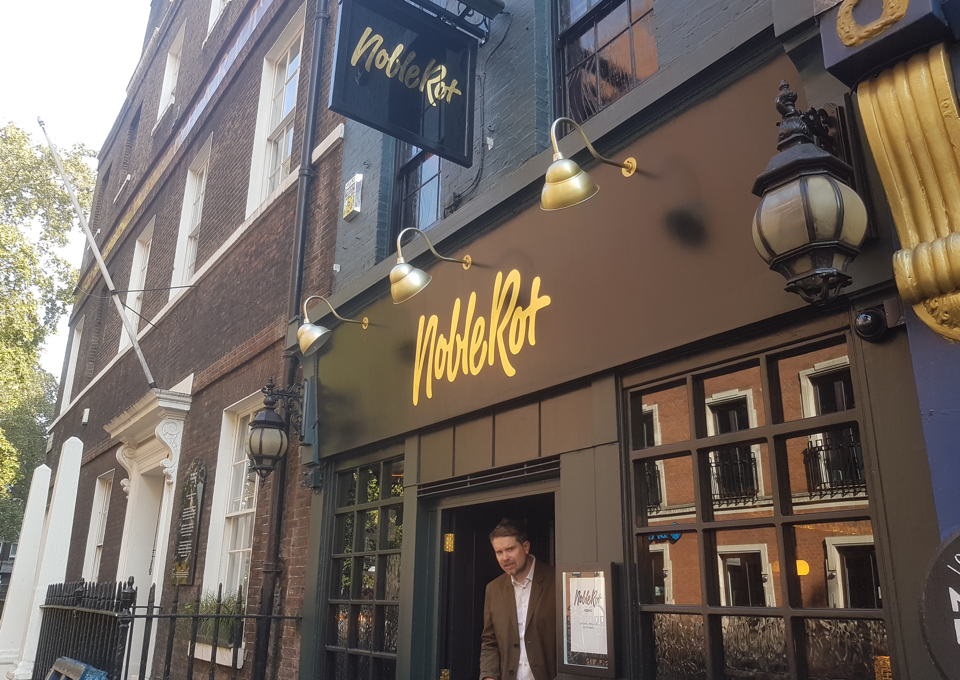 Taken on the morning of opening, proprietor Dan Keeling happened to just exit the door, whilst a moment later, chef Alex Jackson poked his head out of the pavement latch.

As luck would have it, the Gay Hussar has been resurrected as the second outpost of Noble Rot. Its new incarnation pays homage to its illustrious past, celebrates the countless apocryphal tales that unfolded within its walls and incorporating them into its aesthetic. Whereas most makeovers bowdlerize buildings of their soul, Noble Rot Soho preserves what gave Gay Hussar its appeal, recreating its ambiance with a vinous twist. Even empty, you cannot help sensing that this is a place where significant events happened – something that money cannot buy. If only its walls could talk. 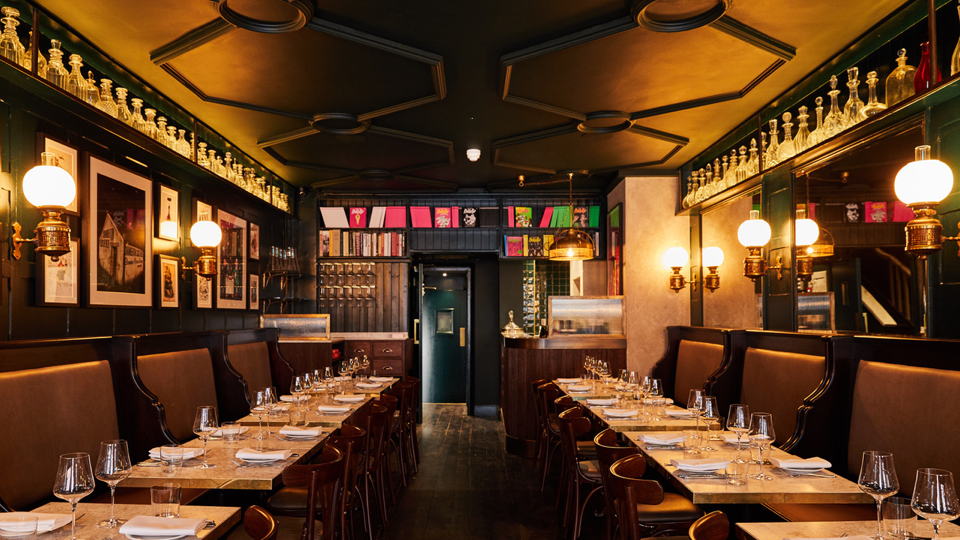 How have they done this?

Partly due to the assiduous decision to maintain and spruce up many of its original fixtures and fittings, the discrete almost lamp-like lighting and subdued color scheme, all deep purples and black wooden flooring that render the interior cozy and intimate, already lived-in. Downstairs is one single room with comfy banquettes lining the entire length of each wall, one side decorated with framed illustrations taken from issues of their namesake magazine from artists such as José Mendez and Benoît Tardif, including a spectacular black and white photograph of Anselme and Guillaume Selosse amidst an explosion of frothing champagne and above, a shelf of antique decanters from David Glick in Westbourne Grove. 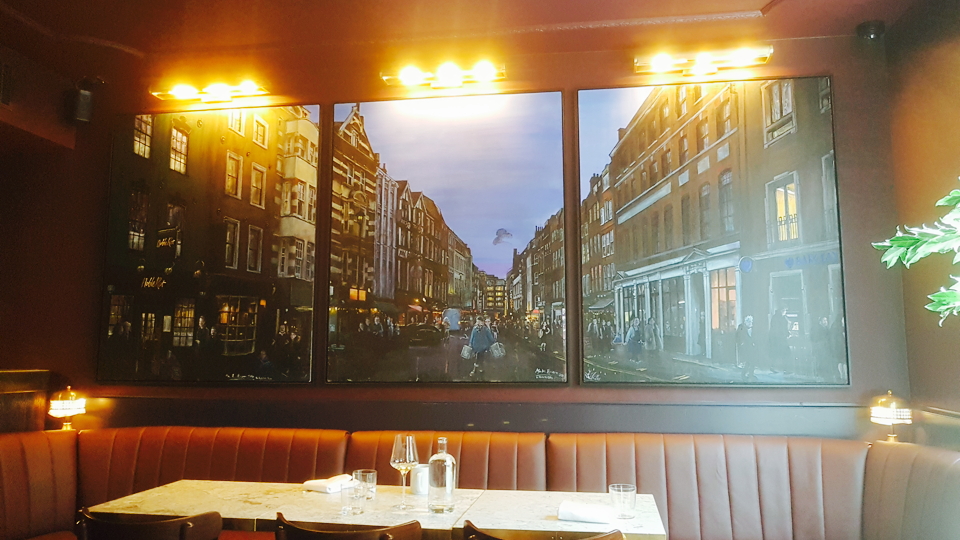 Upstairs could have been a dead zone. But I suspect it will be the place to be seen thanks to a pair of specially commissioned triptychs hung on opposite walls. Artist Martin Rowson, whose cartoons of political elite furnished the original restaurant, painted them over three months, one of many touches that lend a reassuring sense of continuity. Diners will spend hours spotting the celebrities depicted under the streets of Soho at gloaming: suited politicians (Gordon Brown and Michael Foot), inebriated rock stars (Mick Jagger and Amy Winehouse), painters (Gay Hussar regular Francis Bacon and Damien Hirst), restaurant critics (Giles Coren at a cash point)...even the late great Andrew Weatherall lugging DJ boxes down the street. Each personality has some connection to the restaurant, figuring in stories of varying degrees of infamy, some well known and others privy to the cartoonist. And of course, it features the new co-proprietors, Dan Keeling and Mark Andrews.

Following in the footsteps of Au Fil du Zinc in Chablis, Noble Rot Soho becomes the second restaurant where I attended the very first service, after an English sparkling wine versus grower champagne blind tasting that I shall recount in a forthcoming article. As this took place prior to the official opening, I will return later this year once chef Alex Jackson, formerly of Dalston’s well-regarded Sardine and the staff are bedded in. Keeling told me that their aim is to serve a different menu to the original Lambs Conduit Street branch with a couple of crossovers such as their signature dish of slip sole. Certainly, for a Jackson’s first service in a newly renovated kitchen, the dishes look very enticing.

Starters were superb, and I hope they become permanent fixtures. The Choux bun encasing duck liver parfait and Tokaji jelly was a perfectly formed sphere of gorgeousness - melt-in-your-mouth delicious. I could have eaten another despite the God knows how many calories it contained. Equally divine was the eggs Casino, a traditional Hungarian appetizer of deviled eggs with paprika, mayonnaise and mustard. They were a bit wobbly to hold so best pop it whole into your mouth, lest you want yolk dribbling down your chin or exploding mid-air. 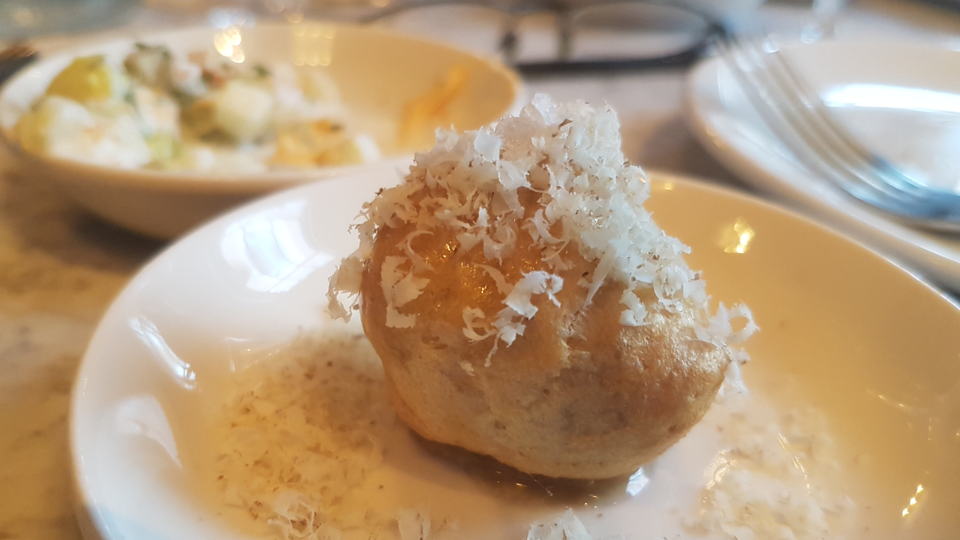 Black figs, tomatoes and salted Ricotta worked extremely well, the figs fresh and sweet, the tomatoes just the right consistency and the thin slithers of Ricotta imparting saltiness. This was a welcome healthy dish to offset the guilt of devouring that Choux bun.

The game wrapped in cabbage with a dollop of sour cream, clearly homage to the Gay Hussar’s Hungarian heritage, was delicious. The sauce might need a little thickening perhaps but like all these things, it is a work in progress and this was day one. 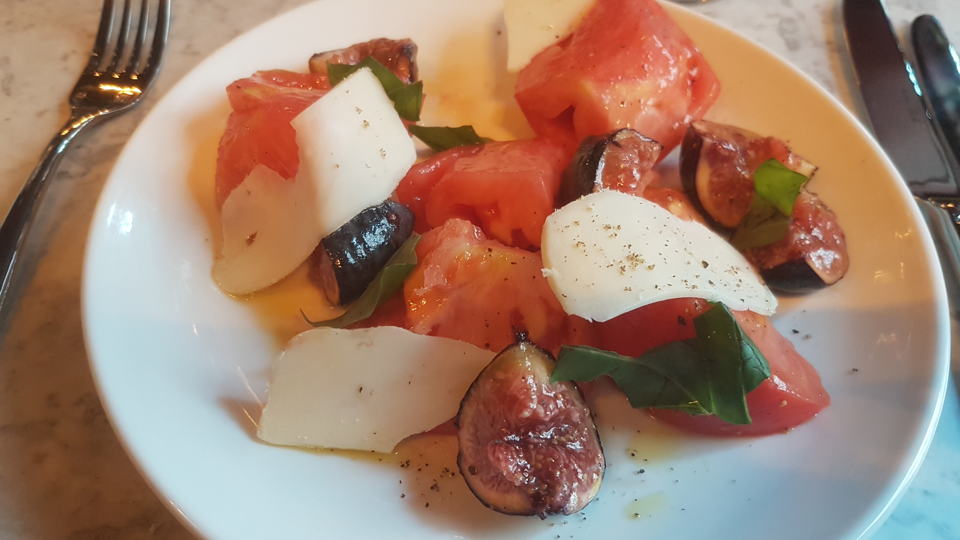 Finally, a delicious plum and brown butter tart with crème fraiche was perfectly baked and not too heavy.

Having just tasted two-dozen sparkling wines, we were all in need of libation without the bubbles, starting with a pair of Chablis from Eleni & Edouard Vocoret. The 2018 Chablis Le Bas de Chapelot has a slightly muffled bouquet with attractive tropical tones of passion fruit and pineapple. The palate is nicely balanced, though it is missing the nervous spine that is evident in their recently tasted 2019s. I would drink this over the next four to five years. The 2017 Chablis Les Butteaux 1er Cru is a cuvée that was omitted from my barrel tastings in 2018 as it had just been racked. It has a well-defined bouquet with flint and light quince and citrus aromas. The palate has a fine bead of acidity, an edginess that marks out this vintage above others. Notes of citrus peel, quince and Golden Delicious emerge with aeration delivering an understated yet persistent finish. This should drink beautifully over the next decade. 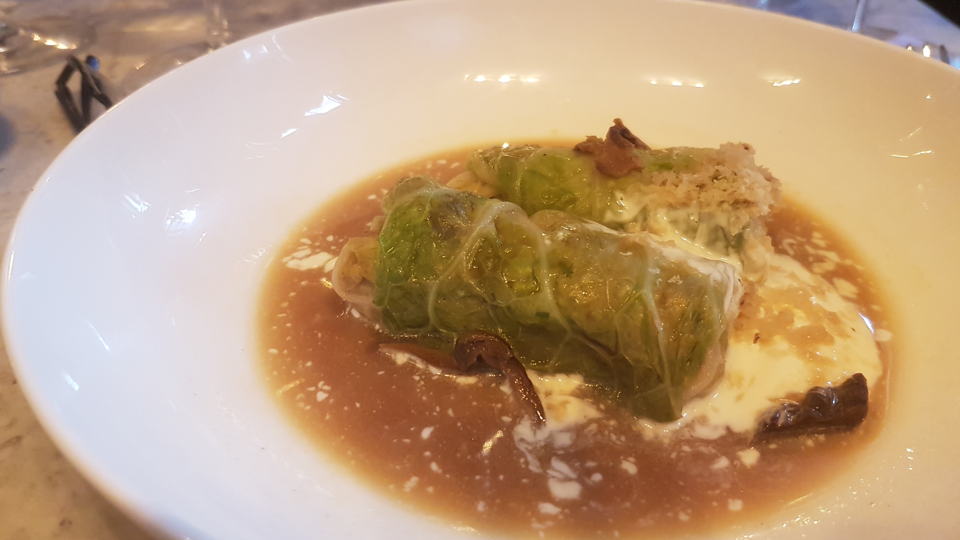 To baptize the new restaurant, one of our generous guests proffered a magnum of 1982 Grand Puy Lacoste. It is a few years since I last tasted this Pauillac but it remains a magnificent wine. Limpid and youthful, it displayed very little ageing compared to other 1982s, partly due to the larger format. The bouquet is very seductive with ebullient dark plum, iodine and blueberry, perhaps not far removed from another great Left Bank that year, the 1982 Pichon-Lalande. The palate is exquisitely balanced with supple, saturated tannins. This has clearly mellowed because it was extremely tannic two decades ago; pure and sensual towards the velvety smooth finish. This is only just reaching its peak, but there is no doubt that well-stored bottles could last another 30-40 years. Bringing up the rear, a 2017 Bourgogne Hautes Côtes de Nuits Rouge from David Duband. I must confess that I used to find Duband’s wines a tad over-extracted and lost touch. I heard that Duband had altered his style and this was certainly evinced by this delightful young Pinot. Crushed strawberry and blueberry ‘dance’ on the nose that can only be described as “joyful”, whilst the palate is medium-bodied, fleshy and ripe, not complex yet delicious. Whereas this might have been pushed in the winery before, I found the 2017 well-balanced and silky smooth. I will have to revisit Duband soon. 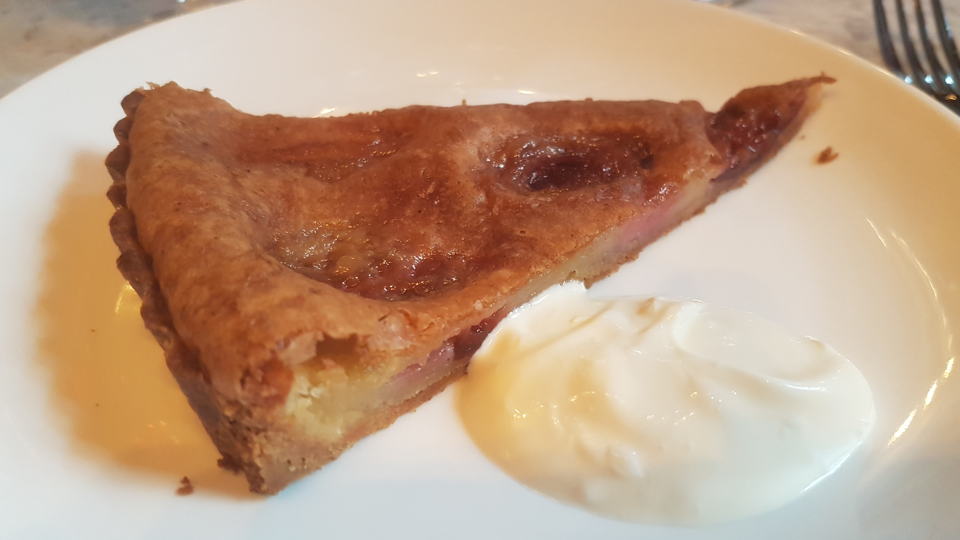 The opening of the original Noble Rot was one of London’s most important restaurant openings in recent years; one of the first to blend the vogue for fine dining without Michelin-starred stuffiness with a far-reaching, eclectic wine list that ranged from expensive blue chip producers from classic regions to cult natural growers that only three sommeliers have ever heard of. It was a restaurant that was geared to a younger hip audience with a sprinkling of celebrity (I still remember chatting to the drummer of Coldplay whilst Ralph Feinnes brushed past me.) 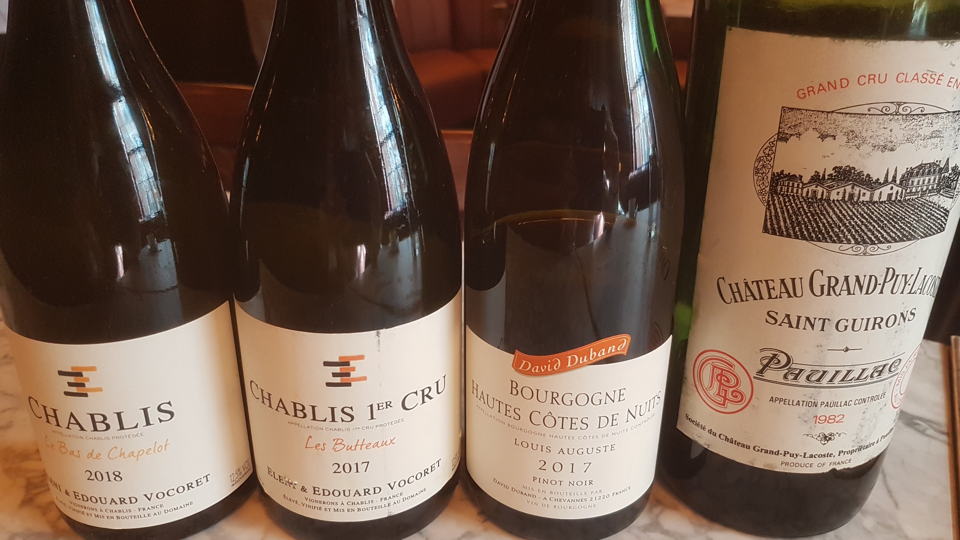 Having spent most of my adult life treading the streets of Soho, frequenting its record shops, nightclubs and dodgy bars such as the notorious Garlic & Shots, I have lamented the ebb of Soho’s uniqueness, born from its musical and cultural heritage, its eccentric multi-cultural residents and yes, its seedy past. Sadly, institutions such as Alistair Little, Malletti and Stockpot have long disappeared whilst others like The French House are pale imitations of former selves or like Kettners, transformed into private member clubs. When restaurants are valiantly forming a rearguard action against COVID, the opening of Noble Rot Soho at this moment represents a rare event as neighbors remain mothballed for fear what winter will bring. Alongside the great Andrew Edmunds (earmarked for a future Vinous Table), Noble Rot Soho will inevitably become the go-to restaurant for those in the heart of London seeking great food paired with wine worth talking about, consumed in building that exudes charm and personality. London’s restaurant scene, like everywhere else, needs to see new shoots of growth, signs of hope of a post-COVID afterlife. You could argue that now is the worst time to open your doors, but maybe it is the perfect moment. I suspect that it will almost instantly become an institution as cherished as the Gay Hussar or indeed, the original Lambs Conduit Street branch. Even if Francis Bacon no longer props up the bar, in months to come, you might walk in and find me carrying on the tradition.