The Ultimate Bachelor Party at Saison

Nepal long pumpkin; torn pumpkin seasoned with barbeque octopus; lacto-fermented pumpkin and pumpkin seed oil; and pumpkin cooked above the fire for a number of days with whipped buttermilk

Persimmon dressed in honey and bourbon

Orange Creamsicle served in its rind

This spectacular bachelor party/dinner at Saison was a fitting sendoff as one of our dear friends prepared to embark on the next stage of life. The food, wines and service on this night were as good as it gets. 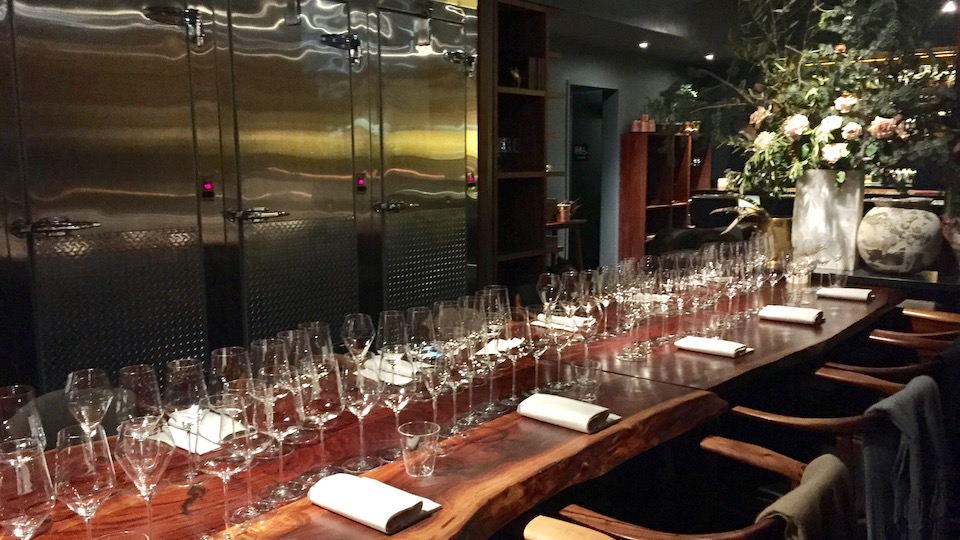 The table is set…

Chef Josh Skenes's singular cuisine is based on cooking over an open fire and a maniacal passion for seeking out the very finest raw materials. Caviar is wrapped in kale and then warmed over the fire prior to being served. The black cod cooked over fire embers is another highlight on this menu. Nepal pumpkin, presented three ways, is a perfect fall dish that also works beautifully with our wines. Slices of pristine Diamond Turbot are served with a plate of lettuces and flowers meant to be made into wraps, alongside the rib of the fish cooked over embers. The juxtaposition of the freshness from the raw fish and the richer flavors and textures from the open fire is a theme that often shows up in the food. Saison's intimate dining room offers guests striking views into the open kitchen as the action unfolds, with a 1980s soundtrack that pumps out a steady stream of hits over the course of the evening.

As much as I enjoy the Saison classics, I would have liked to see more variety. That said, there is no doubt that diners often go to world-renowned restaurants precisely to experience the signature dishes. So, success can be a sort of Catch-22 in that regard. Nevertheless, I imagine I am not the only person who felt some of these courses were getting a bit long in the tooth as the menus were quite different on my next two visits, one of which will be the subject of a forthcoming article. 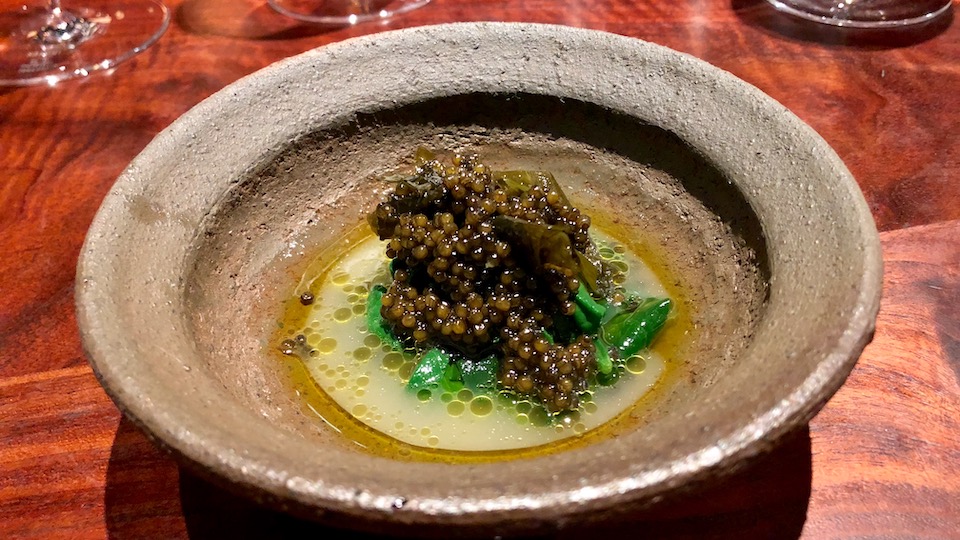 Among the signature dishes, the aforementioned caviar was stunning, especially with the last of the Champagne and the five Coche Charlemagnes that followed. The sea urchin, served atop grilled whole wheat bread, was bold, lusty and full of flavor. I have never understood the barbequed quail at Saison. On this night, it was still raw, which made it hard to eat with the hands. That said, some of my friends enjoyed it quite a bit. I did not. No matter. Within a matter of what seemed like seconds, a replacement morsel of duck liver arrived. Impressive. I have to say, I was quite amused when, a few months later, Saison served me the quail yet again, but cooked all the way through, a pretty gutsy move in my book. The antelope was delicious, but, frankly, the buttermilk biscuits threatened to get most of the attention. Pass the hot sauce, please. 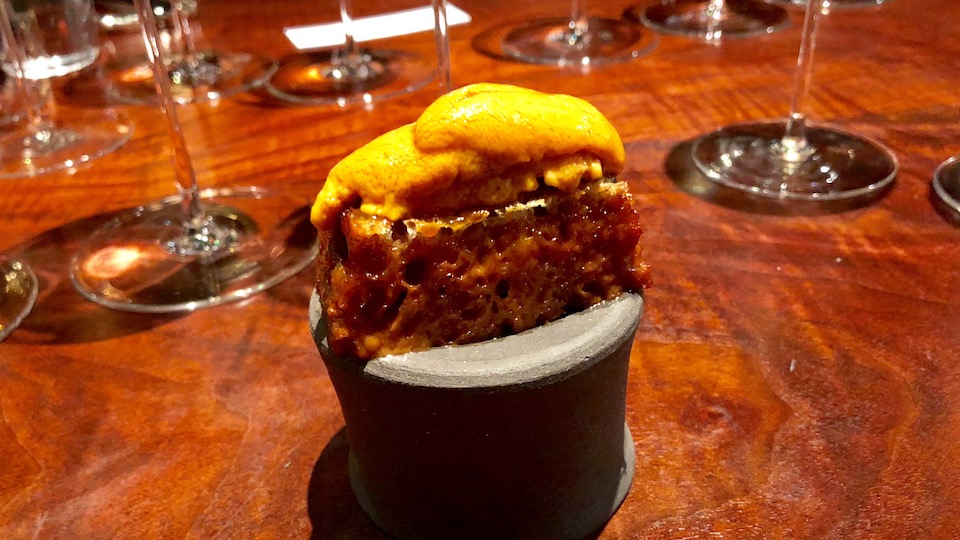 Service was extraordinary. Saison is not the sort of restaurant that is set up for large groups. I am sure that coordinating the preparation and serving of this meal was not exactly easy, and yet everything was seamless. Wine service was probably an even bigger challenge, given the number of bottles and what looked like an endless number of Zalto stems, but Wine Director Noah Dranow and his team pulled everything off with aplomb. No detail was too small to be overlooked. There is something magical about service that is highly attentive and yet not obtrusive. 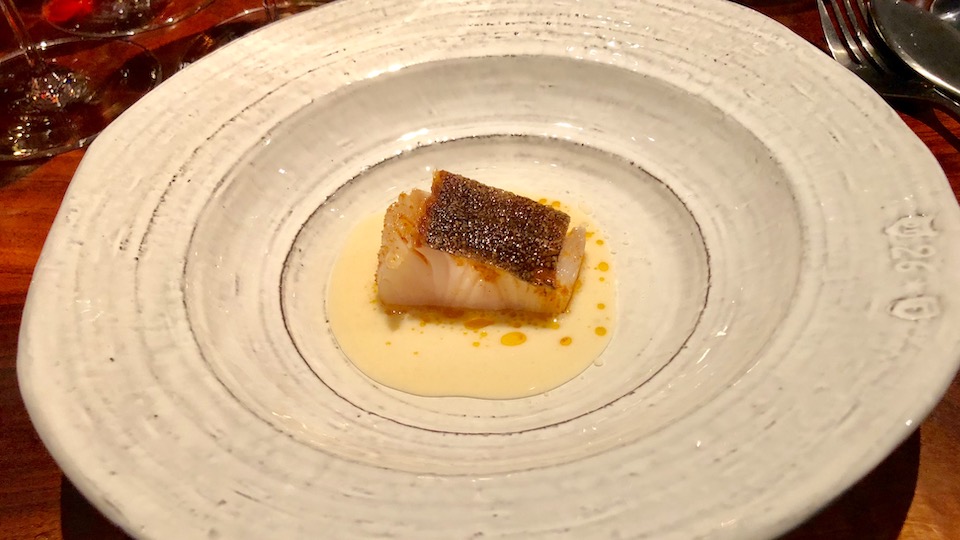 What could possibly be better to start the night than the 1975 Dom Pérignon from magnum? Nothing. A spectacular wine, the 1975 soars out of the glass with breathtaking beauty. Tense, brilliant and finely sculpted, especially for a wine of its age, the 1975 is flat-out stunning. The interplay of richness and subtlety makes for a truly unforgettable experience. We are off to the races. After the 1975, the 1982 Dom Pérignon Rosé from magnum faces a tough challenge, but it, too, is fabulous and nearly as epic. Orange peel, cranberry, mint, dried autumn leaves and rosewater give the 1982 a decidedly exotic feel. Vinous and deep, the 1982 Rosé is sublime. I have always adored the 1982, so it is hard to resist a second taste, but I pace myself, as there is so much yet to come. 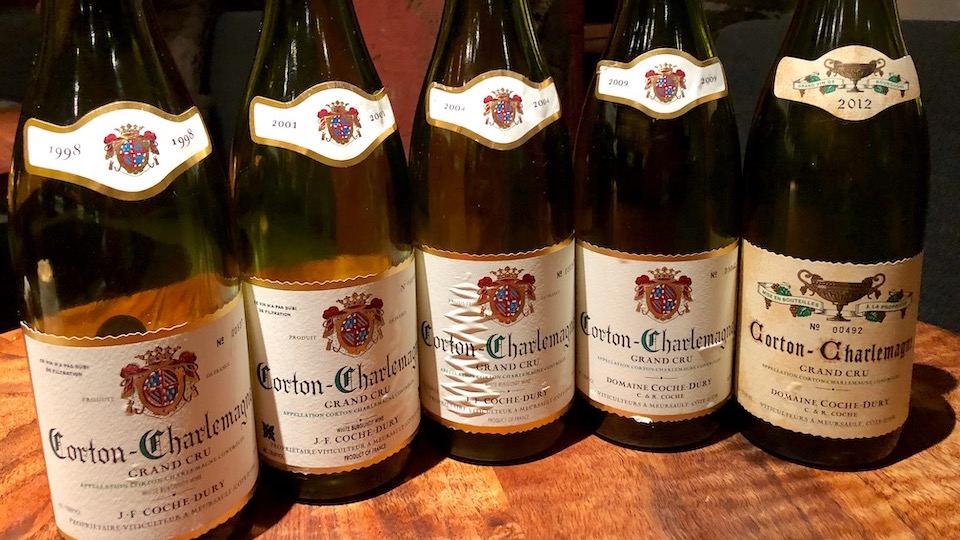 A lineup of Corton-Charlemagnes from Coche-Dury

What a thrill it is to taste and drink five vintages of Coche’s Corton-Charlemagne side by side. The 2012 Corton-Charlemagne is an infant, spectacularly rich and dense. Hints of classic Coche reduction wrap around a huge core of fruit. I am not sure what else there is to say, really, as the 2012 is wonderfully complete. Piercing aromatics, superb textural richness and energy are some of the many signatures. All the 2012 needs is time, preferably lots of it. I imagine readers who can wait another decade will be knocked out by the 2012, even if it is already arrestingly beautiful. The 2009 Corton-Charlemagne is a fascinating contrast to the 2012. Warm weather yielded an unusually racy, luscious, open-knit wine. Of course, the 2009 will be even better in another few years’ time, but drinking a bottle now is hardly a crime. Exquisite in its layers and overall nuance, the 2004 Corton-Charlemagne is utterly sublime. Although still quite young, the 2004 is just starting to turn the corner where some of the youthful edge start to soften and pretty notes of bottle complexity develop. On this night, the 2004 is tremendous. Sadly, the 2001 Corton-Charlemagne is not perfect. Even so, the wine’s power and textural resonance are remarkable for a wine of its age. The 1998 Corton-Charlemagne is my favorite of these five wines to drink now, as it is fully expressive, with all of the layers of texture and nuance that only develop in the Coche Charlemagne around age 15-20. Oily and beautifully resonant in the glass, the 1998 is sublime. 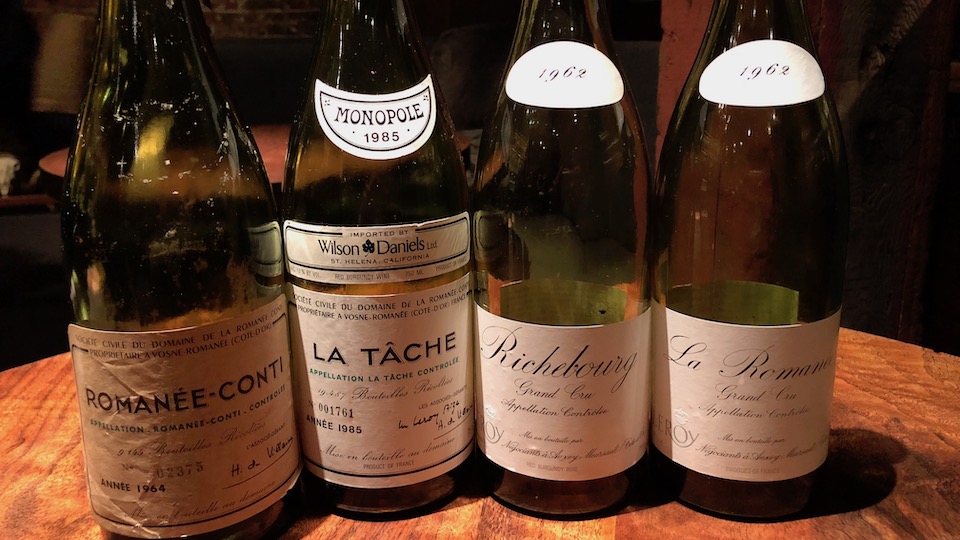 A bevy of striking red Burgundies

Sadly, the 1964 Romanée Conti is flawed, probably the victim of poor storage along the way. We have better luck with the 1985 La Tâche. The 1985 has been fully mature for a while now, but it still has lovely aromatic complexity, with striking rose petal, spice and star anise nuances, and enough depth to drink well for another few years.

Two wines from Maison Leroy are extraordinary. I have been incredibly fortunate to have the 1962 La Romanée twice before. The first was a Maison Leroy bottling, like this one, that was equally sublime. Then, a few years ago, I tasted the 1962 at Domaine du Comte Liger-Belair as part of an incredible retrospective with wines back to 1865. That bottle came from a single barrel Louis-Michel Liger-Belair’s parents received as a wedding gift during the period when the wines were made by Henri and Jean Forey and sold to Henri Leroy, who had an exclusive. Needless to say, the 1962 La Romanée is not exactly the kind of wine one expects to drink on a regular basis. And yet, here it is again, in all of its resplendent glory. Silky, perfumed and vivid, the 1962 is achingly beautiful in every way. The purity of the flavors is simply mind blowing. You know what? The 1962 Richebourg served alongside it is even more profound. I can’t ask anything more. Here, the wine is strikingly pure and crystalline, with soaring aromatic presence and layers of bright red fruit that seem to go on forever. Even after all of these years, the 1962 pulses with all of the energy that is such a Richebourg signature. The 1962 is insanely beautiful. There is not much more that I can add. 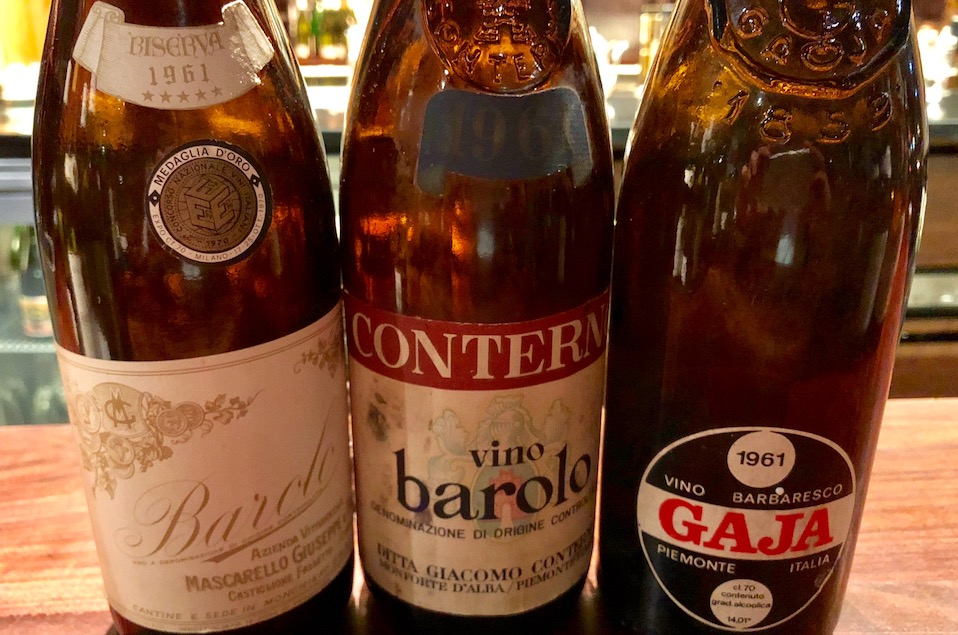 Giuseppe Mascarello’s 1961 Barolo Riserva dates back to the era when the Mascarello Barolos were blends, as they were up until 1970, when Mauro Mascarello made the first vintage of this Barolo Monprivato, the wine that would go on to become the estate’s flagship. But there is something magical about the great Mascarello Barolos of the 1960s, which were made by Mauro’s father, Giuseppe. At their best, the Barolos of this era are exquisitely perfumed, silky and stunningly beautiful. The 1961 is all that. Although this bottle is not quite as fine as a bottle I drank a few weeks prior, it is still pretty stunning. Wow. Gaja’s 1961 Barbaresco Infernot is another Piedmont icon. “Infernot” is a Piedmontese term for a cellar, often carved out of stone or rock, where bottles were left to age. Giovanni Gaja used this term for the last cask of Barbaresco to be released during a time when a given vintage was bottled over several years, as the wine was sold. In 1961 a freakishly hot growing season produced wines of unusual richness and density. That is exactly what comes through here. Powerful, layered and captivating in its beauty, the 1961 is both stellar and a great example of top Barbaresco from this era. Giovanni Conterno’s 1961 Barolo is equally moving. Here, too, the wine’s depth is truly remarkable, considering the 1961 is nearly sixty years old! Brooding and savory in the glass, the 1961 Barolo is simply magnificent. Conterno’s 1958 Barolo Riserva Monfortino is exotic, deep and powerful, all of which is notable, as this is not an especially great bottle of a wine that can be profound. 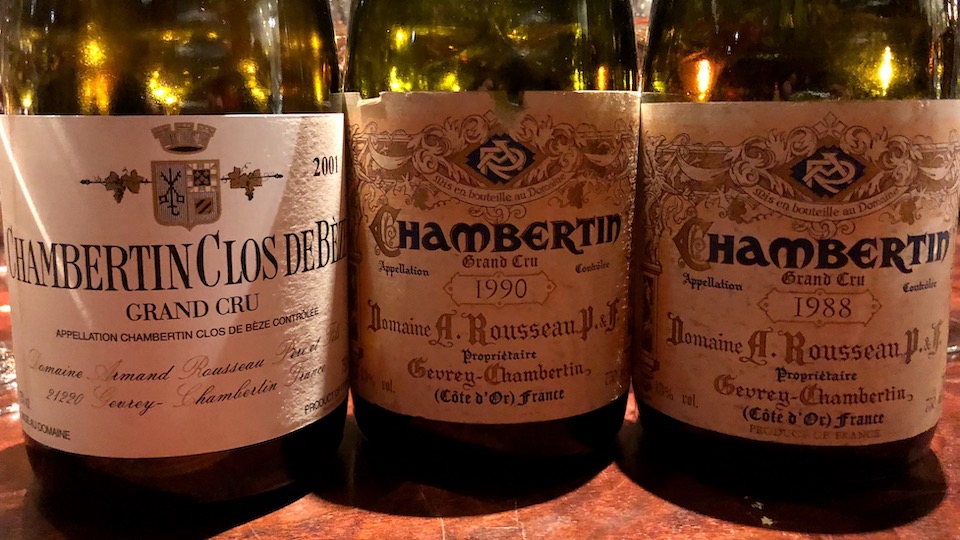 Memorable wines continue with this spectacular trio from Rousseau. The 2001 Chambertin Clos de Bèze, from one of my favorite vintages, is spectacular. Rich, deep and explosive, the 2001 has so much to say. The intensity of the aromas and flavors is simply compelling. What an arrestingly beautiful Burgundy it is. The 1990 Chambertin is elegant, lithe and gracious at first, with gently lifted aromatics and subtle layers of fruit that open up gradually. Kirsch, mint and floral notes all show lovely freshness as the wine gains volume and textural depth with time in the glass and shows off its more exotic side. Another exquisite wine, the 1988 Chambertin is impossibly sweet and perfumed, with silky texture and an extraordinary sense of poise that adds to the wine’s total sense of seductiveness. The 1988 loses some persistence with time in the glass, but it is hard to fault a wine that is nearly thirty years old. 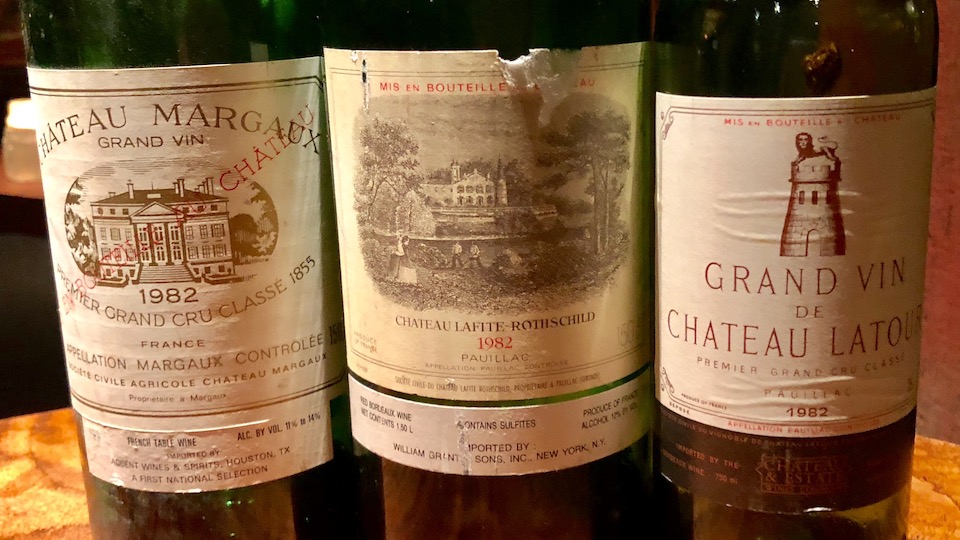 A trio of 1982 First Growths rounds dinner out in style. The 1982 Lafite, from magnum, is exquisitely beautiful in the way only Lafite can be. A wine of subtlety and nuance rather than power, the 1982 is incredibly captivating. Usually a much sexier wine, the 1982 Margaux needs quite a bit of time to reveal its considerable charms. This is one of the most reticent examples of the 1982 I have come across. Even so, the wine’s perfume and silky radiance are captivating. The magnum format has helped the 1982 preserve great freshness and energy. One of the many highlights of the night, the 1982 Latour is simply eternal. Dark, powerful and absolutely riveting, the 1982 possesses extraordinary balance and pedigree to burn. The 1982 has always been tremendous. On this night, it more than lives up to its reputation as one of the greatest wines ever made in Bordeaux. 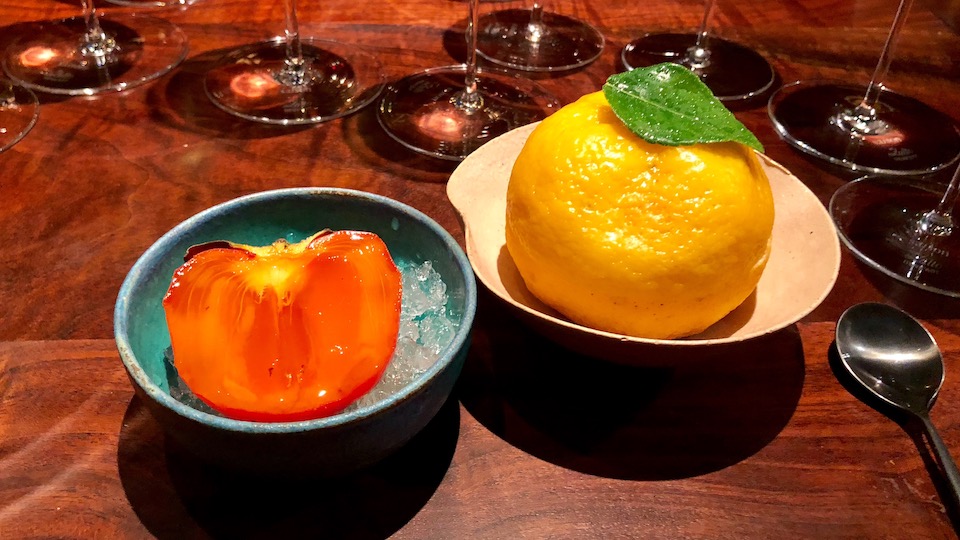 Persimmon dressed in honey and bourbon; Orange Creamsicle served in its rind

With that, the evening draws to a close. What a treat it was to share this unforgettable evening of food, wine and camaraderie with a close group of friends and celebrate a new beginning for M. Thanks again to everyone for sharing so many amazing wines, and to Saison for providing such a gorgeous setting for the night.