Vintage 2018 is not a show-stopper for Pfalz Riesling. Nor are the wines likely to go down in history for their longevity. Yet, it isn’t just an eminently appealing vintage, it’s also one of enormous promise, not just for the Pfalz, but for what it says about where German Riesling as a whole could be headed. 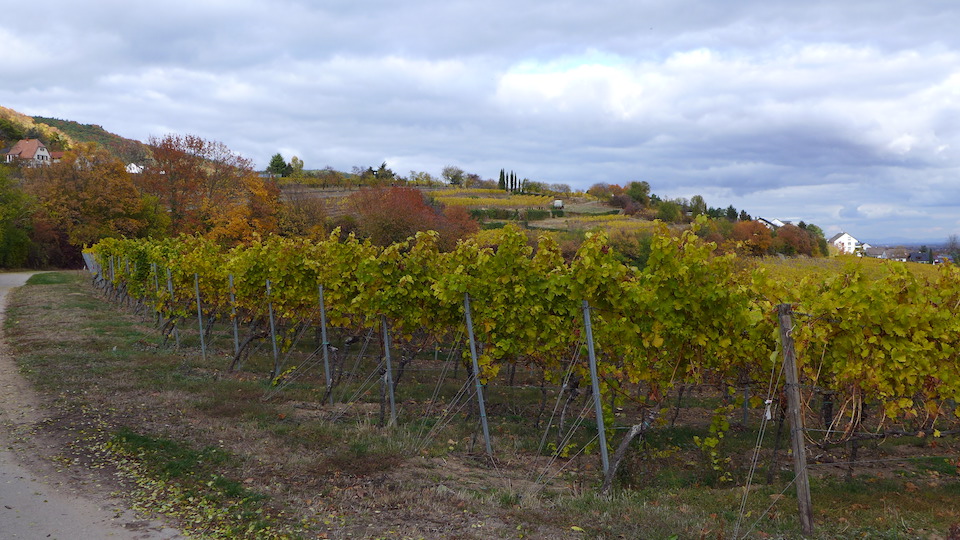 Thanks to the work of Christmann and Müller-Catoir, the largely gentle but in part terraced slopes of Gimmeldingen are enjoying renewed recognition.

At Once Ominous and Promising

When I reported on vintage 2017 in the Pfalz, I chose as one of my subheadings “Ominous Viticultural Horizons,” pointing out that, as Germany’s warmest Riesling-dominated region, the Pfalz faced “especially acute” worries and challenges in the face of climate change.

In late August 2018, when I tasted von Bassermann-Jordan’s legendary Forster Ungeheuer Riesling from the record-settingly precocious harvest of “Comet Year” 1811, I could not fail to note both near incredulity and slight apprehension, at how closely reports from the surrounding vineyards resembled those of 1811. On September 8 of the same year proprietor Andreas Jordan recorded in his diary: “grapes already completely ripe.” In fact, by the end of August 2018, most Pfalz estates had already commenced the earliest harvest in their histories, including of Riesling at any addresses that hoped to render Riesling Sekt. Not that long-time Bollinger chef de cave Matthieu Kauffmann – at the time presiding as cellarmaster over an unprecedentedly ambitious sparkling wine program at Reichsrat von Buhl – was expecting 2018’s abundance of fruit to translate into copious base wine for that purpose. Acid levels were already too low and, even more importantly in Kauffmann’s estimation, sugar levels too high. It seemed that 2018 was destined to be a year in which Pfalz growers could do no better than fight the effects of heat and drought to a standoff and settle for relatively soft, voluminous Rieslings that would hopefully avoid being blowsy or conspicuously alcoholic.

Instead, in the hands of top Pfalz practitioners, the 2018 growing season, while suboptimal for Sekt, yielded rich and concentrated, yet, by and large, animating and refreshing Rieslings, spirited but seldom spiritous. It could be done, even in the face of freakish precocity, summer drought, and near-endless sunshine! But then, it was precocity of bud-break and flowering (which was almost too perfect) that guaranteed grapes harvested at the beginning of September would have enjoyed more than the proverbial hundred days on the vine. Meanwhile, heat and drought led to late-summer vine shutdown that sometimes translated into advantageously later picking dates at higher acidity and lower sugar than many growers had initially anticipated. The abundance of fruit in 2018 could conceivably also have exercised a positive restraint on sugar accumulation. But then, experience at Bürklin-Wolf suggests that drastic selectivity was sometimes necessary in the face of large quantities. In cellarmaster Nicola Libelli’s telling, “the high yields, and the strain that large crop loads placed on the vines” left a significant share of that crop subpar by Bürklin-Wolf’s high expectations. But it also left a volume of eventual wines that are normal by long-term standards, and one featuring quality that on occasion approaches the sublime. None of the many 2018 successes, I hasten to add, would have been possible were it not for an extremely well-watered late winter. Had the 2018 growing season been preceded by 2019’s or 2020’s paucity of winter precipitation, things could not possibly have gone as smoothly as they did. 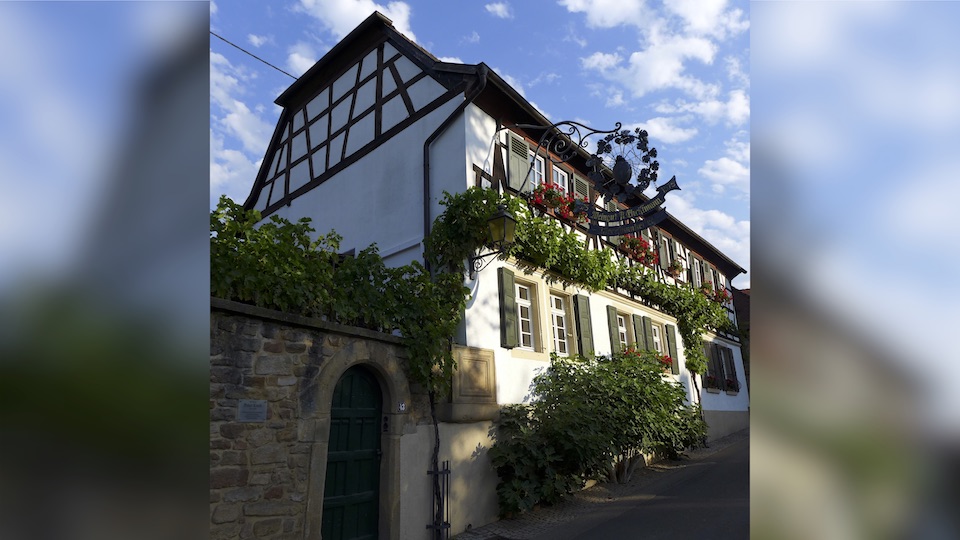 The A. Christmann estate – at which VDP president Steffen Christmann, his father Karl-Friedrich and his daughter Sophie work side by side – retains a deceptively timeless look along Gimmeldingen's narrow main drag. But it has recently taken on two formidable new viticultural projects.

My previous accounts of 2018 in Germany’s diverse Riesling-growing regions have emphasized the variety of viticultural, harvest and cellar strategies employed to combat potentially deleterious effects of drought and almost unremitting warmth. Successes in the Pfalz point to certain common strategic denominators. Plowing can still release moisture that the vines desperately need, but growers are coming to appreciate that the advantages of a well-chosen and well-maintained cover crop and undisturbed soil in cooling a vineyard outweigh any competition for moisture with the vines. Aggressive hedging of vines is gradually on the way out, inasmuch as excessive sun exposure has turned into a larger long-term liability than rot. And later, lighter hedging is also one among numerous techniques of canopy management proving capable of retarding precocious or excessive sugar accumulation. Capacity to chill grapes has become critical, at least at any but those estates small enough that they can confine picking to just a few early-morning hours. What threatened in the course of the past decade to become a knee-jerk fashion for pre-fermentative skin contact has largely given way to judicious, vintage-dependent assessments and a more frequent fondness for whole-cluster pressing. 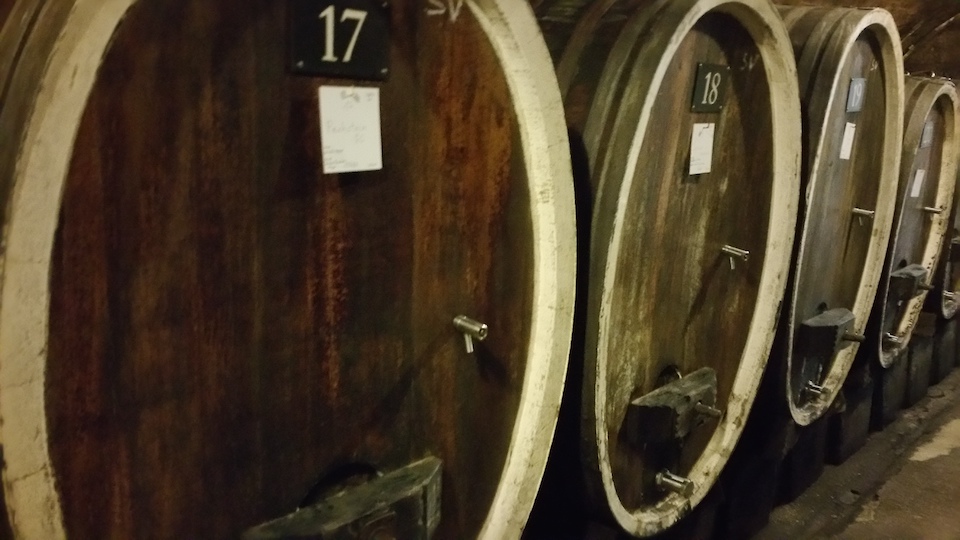 In a generous year, each of Bürklin-Wolf's vineyard-designated wines can be raised in traditional 1,200-liter Stückfass, or at least fill one 600-liter Halbstück. But cellarmaster Nicola Libelli has recently introduced a collection of smaller casks so as to minimize wine relegated to tank...

Naturally, timely harvest is essential to success, and for nearly all growers, “timely” nowadays translates into picking dates much earlier than those that prevailed as recently as a decade ago. “We’ve had ample experience by now with vintages like this,” observed Volker Knipser of 2018, “and the trick is to pick Riesling before the acidity begins slipping even lower.” But this makes assessing timeliness sound deceptively formulaic. “Determining the right moment to pick any given parcel has definitely become overwhelmingly important,” stressed Steffen Christmann, “but also increasingly difficult, and in a year like 2018, the window of optimal ripeness can be exceedingly narrow.” In such a warm, dry year as 2018, insisted Hansjörg Rebholz, “ripening is bound to differ widely, especially by grape variety but also by vine age, vine genetics and site, according to how the vines manage to deal with stressful conditions.”  The sizable share of growers nowadays who, like veterans Christmann and Rebholz, practice a nearly comprehensive Vorlese, or preliminary picking of less promising or potentially less concentrated grapes, must be prepared to pay sharp attention and have large, talented, flexible crews ready at the order to optimize the eventual Hauptlese – the literal “main event” – because removing some bunches early can easily turbocharge maturation in those that remain. 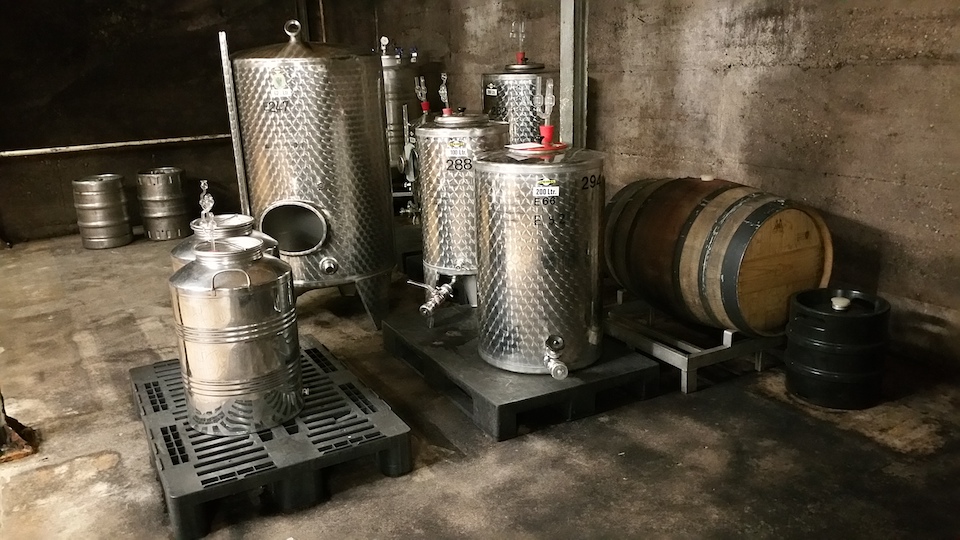 ...and even so, quite an array of stainless steel vessels is needed to accommodate every last precious drop of impressive Bürklin-Wolf "PC" and "GC" Riesling and facilitate topping off of the casks with authentic replacements for the "angel's share."

The 2018 harvest might thus have become a train wreck. But despite how things appeared early on – and especially at the beginning of September – disparities in grape variety and site such as Rebholz predicted, turned out to be the grower’s friend. “I thought, this is going to be the fastest harvest of all time,” related Markus Spindler – and at scarcely four weeks, 2017 had already been fast for him – “because it seemed in 2018 everything was getting ripe at the same time.” In the end, though, Spindler recorded one of those nearly record-long 2018 harvests, not finishing up completely for seven weeks and recording considerable success. “I’ve never experienced such rapid growth as in the late spring and early summer of 2018,” noted Martin Franzen of Müller-Catoir, “but in the end the harvest was much more relaxed” than in 2017. As the third week of September ended, Rebholz was still dissatisfied with the must weights, much less the flavors, in his top sites, so he told his pickers to take the next seven days off. As if to order, frost hit Siebeldingen on September 30, and over the ensuing eight days, Rebholz – the last to finish among growers I visited – harvested his Grosse Gewächse. 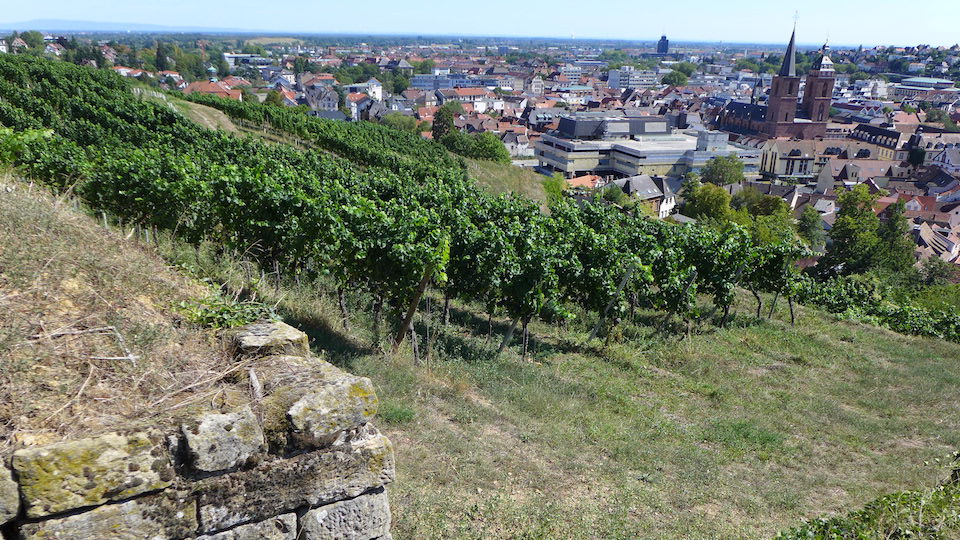 Christmann and Müller-Catoir have embarked on a project to restore once-renowned terraced slopes high above Neustadt, only a portion of which remained planted prior to their acquisition.

Sending a Signal with Sekt

What could possibly signal a more audacious Pfalz faith in the possibility of defying climate change and achieving flavorful, profusely aromatic grapes with still-generous acidity and modest sugar than founding a 30-acre estate devoted exclusively to sparkling wine and with the express intention of producing Germany’s best? To be sure, climate change was hardly a motivating factor in the establishment of Christmann & Kaufmann. Rather, its inception traces to the improbable coincidence of Mathieu Kauffmann’s being forced out as cellarmaster at Weingut Reichsrat von Buhl even as his friend Steffen Christmann’s next-door neighbors the Muglers were signaling an intention to lease out their irresistibly well-endowed vineyards. The confidence reflected in this venture seems even more daring when one considers that global warming is not going to slow significantly during the 5-10 years that Kauffmann envisions it will take before he is ready to release the first Christmann & Kauffmann single-vineyard disgorgements from inaugural vintage 2019, and that only two out of five of these are expected to be Riesling.

Nor is Christmann & Kaufmann the only extensive and promising new collaborative project in which Weingut A. Christmann has recently become involved. As described in the introduction to my reviews of the Christmanns’ 2017s, their collaboration with Müller-Catoir is restoring the breezy terraces of what’s officially known as the Vogelsang vineyard high above Neustadt, a once-famed site on the cusp between sandstone and limestone whose potential encompasses both Riesling and Pinot Noir. I would be remiss, though, were I not to once again confess that with few exceptions – Knipser and von Winning being notable examples – I remain underwhelmed, and in some instances find downright unattractive the dominant sorts of Pinot Noir that are playing an increasingly important role at many of the most prominent Pfalz estates. (My disappointment encompasses the newly reintroduced Pinot Noir at Müller-Catoir.) In some instances – notably Christmann and Rebholz – I frequently go two or more years without tasting the red wines. Generally speaking, I perceive Pfalz Pinot Noirs, including many that enjoy huge reputations in Germany, as tending toward oaky, smoky, resinous wood overlay, stiffness of texture, and absence of mouthwatering savor to say nothing of charm. 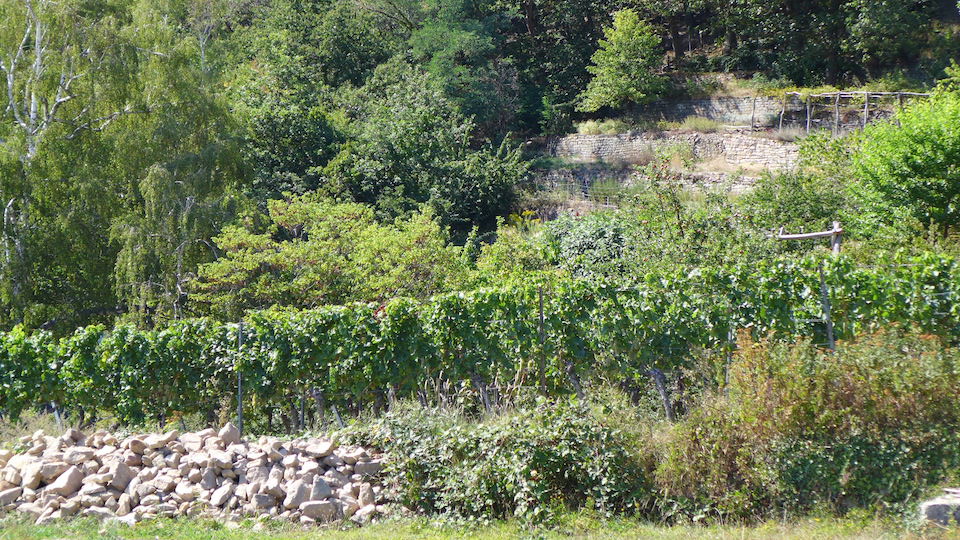 At an intersection of sandstone and limestone, the Neustadter Vogelsang recently acquired by Christmann and Müller-Catoir leaves them lots to restore!

Unsurprisingly, Christmann and Kauffmann embarked on an immediate transitioning of the Mugler vineyards to the biodynamic regimen for which VDP president Christmann has been among Germany’s most conspicuous advocates. And Christmann – who finished harvesting his vintage 2018 Grosse Gewächse even before September’s midpoint – credits biodynamics with particular advantages in a vintage like 2018, allegedly helping promote deep root penetration and low vine stress, leading to harmonious and precocious ripeness while retaining acidity and restraining sugar accumulation. It can hardly escape notice, including by fellow growers, that the other three most prominent biodynamic Pfalz estates – Bürklin-Wolf, Odinstal, and Rebholz – also have enviable qualitative track records. Riesling Germany might be in the rear guard when it comes to growers going organic or committing to the discipline and ritual of biodynamics. But it seems to be catching up in that regard with neighboring France and Austria. Anyone who doesn’t call that promising has simply been ignoring an international abundance of evidence in the glass.

This report is based on visits with 21 Pfalz producers in September and November 2019, supplemented by subsequent stateside assessment of samples. Following usual Vinous practice, scores on any wines that I have not tasted since they were bottled are expressed in parentheses as point ranges. Wines I rated 86 points or lower are occasionally alluded to but generally not accorded a tasting note. I make exceptions to that rule for wines I still deem good values or where I think a tasting note will demonstrate some important point (which might be that I believe the wine in question is routinely overrated, or perhaps that its latest, disappointing performance requires special explanation).