Wouldn’t you know it, like most things in Italy where nothing is really ever cut and dry, a request to sample Rosso di Montalcino flooded my house with wines from three very different vintages. At first, I found this challenging, because my initial intention was to do a report with all 2019s. However, I then realized that this instead provided an opportunity to taste a broad range of new wines, all currently in the market or just entering it, and to gain a better understanding of the next three vintages of Brunello.

Three vintages – 2017, 2018 and 2019 – are all very different in climate, conditions and outcomes. Each one with its highs, its lows and those that fall in between. All three provide a unique experience, whether they are best enjoyed for their primary pleasure, their reserve and immaculate beauty, or for the potential that they hold within. And with all of that said, let’s not forget everyone's second-favorite part about Rosso di Montalcino (the first being to drink them), and that’s to think about what we can expect from the forthcoming Brunellos of these vintages - which I have done my best to outline later in this article. 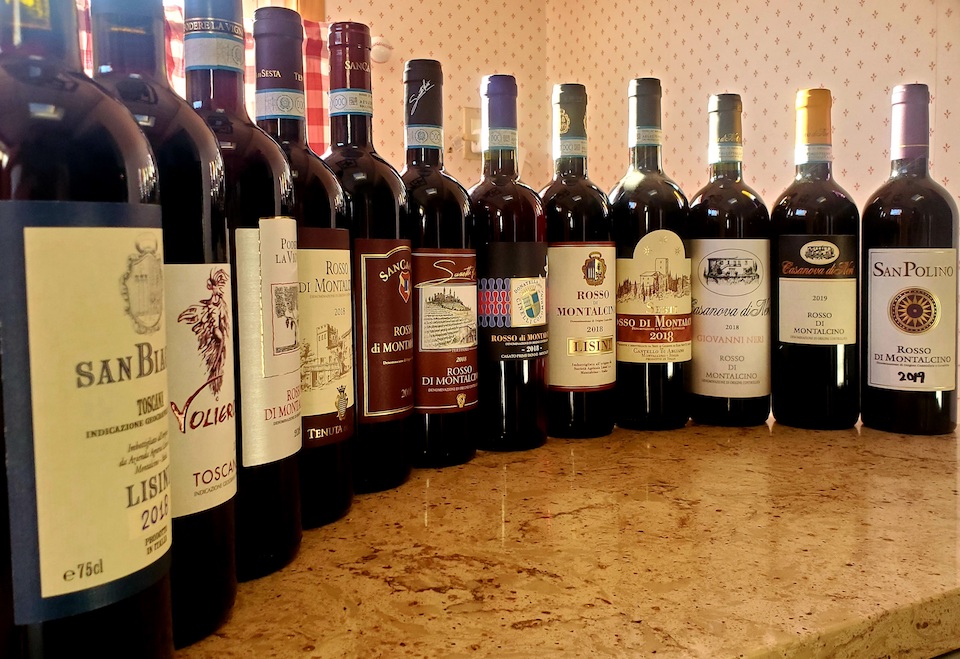 What Is Rosso di Montalcino?

Before we get into vintages, let’s get the foundations of Rosso di Montalcino out of the way. I, for one, am a huge fan of Sangiovese in all of its forms, from pure and juicy using stainless steel, to short-term aging in barrel and bottle to add body and depth, or in its most prestigious form, the highest quality fruit, undergoing long-term aging to create a wine that can approach the level of Brunello. However, when the chips are down and I’m staring longingly at the rows in my cellar for a bottle that’s sure to please, impress and go great with dinner, it’s most likely going to be a Rosso di Montalcino.

The importance of the category to producers is simple. Montalcino is a region where the most recognized wine requires four years of aging prior to release. This is a huge investment of time, space and money, especially if a winery is just starting out or bringing a newly-planted vineyard online. The one year of required aging for the Rosso category and the ability to source fruit from younger vines helps alleviate a large part of this pressure. For the larger or more well-established operations, another common practice is to declassify a barrel of Brunello that they deem to be better suited for earlier consumption. Lastly, a Rosso can come from its own DOC-classified vineyard, which is actually where many good wines can be found, because we’re seeing the best expression of place with a focus on the vines that are producing fruit specifically for the category.

There was a time when the general consensus was that Rosso di Montalcino was used to do away with unwanted juice, while not losing 100% of the revenue on that fruit. A producer could improve the quality of their Brunello while leaning on their name or the branding of Montalcino to move an inferior wine. However, I truly believe, with the exception of only a small percentage of estates, that this is no longer the case. If anything, producers of Montalcino today see the Rosso category as one of the most important investments in growing a loyal customer base. Some producers are purposely creating a wine to be consumed upon release or only within a few years after - but of high quality. While others are bottling what have come to be known as ‘Baby Brunellos’ – Rossos that have the balance and depth to age. In the end, both versions can be fantastic. My personal favorites are wines that straddle the best qualities of each of them. Due to these differences in style, I must stress the importance of the tasting notes themselves. While a ‘Baby Brunello’ with a positive note may be what you gravitate toward, it may not be the wine that will give you the most pleasure over the next year or two. 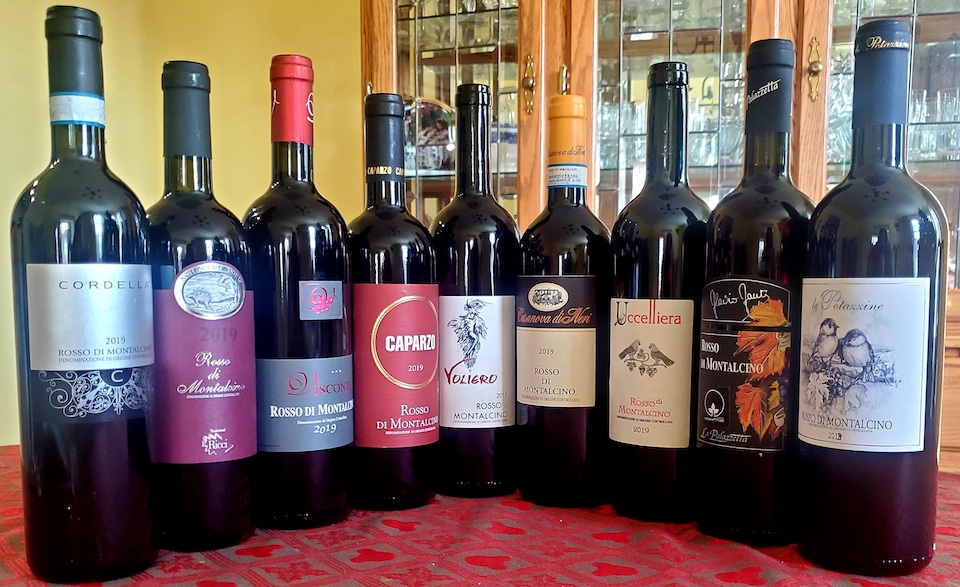 Time to Play the Power of Three Vintage Game

This was the best part of these recent tastings. While going through the wines for this article (and, yes, there are also a couple of 2015s, 2016s and Tuscan Rossos that made their way in), I spent a good amount of time talking with producers about these three vintages, something that I don’t believe we do often enough when looking through our magic eight-ball at Montalcino. It was through these conversations where I was able to witness the ear-to-ear smile when talking about how delicious the 2017s can be, the quizzical look when they consider if 2018 will be a good vintage or not, or the eyes-roll-back-in-their-head, hands held high as if praising Mother Nature herself expression when talking about 2019. In the end, these conversations were priceless.

The 2017 vintage started cool and rainy yet turned extremely warm and dry by June, conditions that lasted throughout the summer months and resulted in an early start to the harvest. Many producers made their first pass through the vineyards around the end of August. In the south, yields were drastically reduced, as berries were literally dying out on the vines. Francesco Marone Cinzano of Col d'Orcia reported that it was the smallest harvest in the history of the estate. Meanwhile, in the cooler north, production at many estates was further reduced by an April frost. The Sassetti Livio Pertimali winery reported that their yields were down by 40%. However, September brought some much needed rain, which helped to balance out ripening before wineries made their final pass through the vineyards. The result is a vintage of low yields yet opulent and rich, in some cases with edgy tannins which will need time to fully resolve. So, while we can all enjoy the hedonistic, intense fruit pleasures of the 2017 Rossos today, the big question is, will the Brunellos deliver the depth necessary to communicate their higher tariff? I can already tell you that not all producers are convinced. When speaking with Giovanni Gaja, of Pieve Santa Restituta, he explained that they decided to skip the production of their prestige-level Rennina and Sugarille in 2017, instead putting the juice into the house Brunello.

In 2018, rain was the biggest challenge, as it plagued the region well into August, coupled with cooler-than-average temperatures. Mother Nature blessed Montalcino with warmer, drier and windier conditions from mid-August on, which in most cases aided in the proper ripening of fruit prior to harvest, but not in all. On average, estates started picking in mid-September, with harvests that lasted well into October. While grapes drying and shriveling on the vines was a fear in 2017, in 2018 the biggest fear was mold and properly removing it from the bunches in time to save the healthy fruit. This resulted in 2018 being a grower’s vintage, a year where putting extra emphasis on the health of the vineyards and vines was paramount. All of that said, the best Rossos of 2018 are really very special. There’s an attractive combination of highly perfumed aromatics, crunchy red fruit and brilliant acidity that makes these wines harmonious, slightly delicate and a true pleasure to drink. However, the same qualities that make the Rossos such a success may not hold up well to the long-term aging required to make Brunello. It will be interesting to follow 2018 Rossos over the coming years. The good news is that no matter what the vintage delivers in the Brunello category, the best Rossos are compelling.

Then there is the 2019 vintage, which the Brunello Consorzio has already rated five stars, and which producers are talking about with high expectations. Climatically speaking, 2019 was something of a roller coaster, with heavy rains in spring, which helped to maintain balance through a heat wave in June. This was followed by another heat wave in July, but luckily another heavy rain event in August replenished the vines. The saving grace came after these rains in August, where temperatures remained warm yet dry, with strong diurnal shifts between night and day to help balance ripening. These conditions carried on throughout the harvest, which was classically on time and abundant, taking place between the first weeks of September through October and delivering perfectly ripe and healthy fruit. That said, expect 2019 to show some warm vintage character. Comparisons to 2015 are already being made by some producers. Personally, I find the new Rossos to have more freshness and elegance than the 2015s showed upon release. That said, there’s a lot of depth and power to be found here as well, which may bode very well for the Brunellos of the vintage. Expect the 2019s to drink well upon release, but even better after a year or two of cellaring.

In closing, I believe that the Rosso di Montalcino category has never been better than it is today. Top-notch Rosso di Montalcino delivers a highly enjoyable expression of Sangiovese with Montalcino pedigree that communicates house style and terroir associated with it. Rosso di Montalcino, with its zesty fruit and high acidity, will pair with nearly any meal imaginable. While some wines are starting to inch up to the price of an entry-level Brunello, the majority of them are still a great value. As for the three vintages in the market, they all have their merits, which will allow them to please a broad range of palates.

All wines were tasted in New York City in December of 2020.

The Grand Vin of the North: The Past, Present and Future of San Leonardo, Eric Guido, July 2020